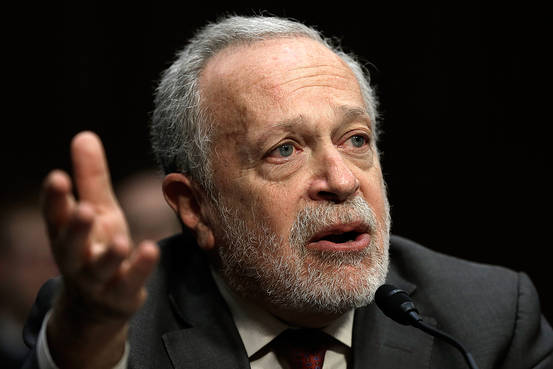 Robert Reich testifies before lawmakers in 2014 on income inequality. In his latest book, he partly blames “the increasing concentration of political power in a corporate and financial elite that has been able to influence the rules by which the economy runs.”
WIN MCNAMEE/GETTYIMAGES

Technology and globalization haunted dreams of American middle-class prosperity. Machines displaced low-skilled (and increasingly middle-skilled) workers whose routine jobs could be automated, and globalization meant the flight of manufacturing and service jobs to factories and call centers in emerging countries. The result was ever-widening inequality. In his latest book, “Saving Capitalism: For the Many, Not the Few,” he’s changed his tune. While those two factors still play a role in growing inequality, he cites a new culprit: “the increasing concentration of political power in a corporate and financial elite that has been able to influence the rules by which the economy runs.” He spoke to Real Time Economics about why capitalism is broken, his shift in thinking, and why economists must study raw power.

Here’s the conversation, edited for length and clarity.

Q: What or who are we saving capitalism from?

A. Capitalism is based on trust. It’s impossible to have a system that works well and is based on billions of transactions if people don’t trust that others are going to fulfill their obligations, or they fear someone will take advantage of them or exploit them. That’s when a system moves from production to protection, and we spend more on everything from lawyers to security guards. That begins to spell the end of a capitalist system that generates widespread prosperity and growth, and that’s the real threat to our democratic capitalist system.

At the macro level, you have only to look at politics to see the anger that is fueling, for example, Donald Trump’s candidacy. That anger is fueled by a sense that polls show very starkly, that people feel the game is rigged against them.

Q. How did you come to see political power as a key force driving inequality in addition to technology and globalization? What were some turning points in your thinking?

A. When I was secretary of labor in the 1990s, I noticed this third factor. I didn’t pay a huge amount of attention to it at the time, but it certainly stuck in my craw. And that was the increasing political power of big corporations, Wall Street, and wealthy individuals.

For example, even the suggestion of an OSHA [Occupational Safety and Health Administration] rule would bring out the furies. We were looking at repetitive stress injury, for people who spent days behind computer terminals. There were some very simple things employers could do to reduce these injuries, but the mere suggestion that we were thinking about this caused an avalanche of congressional phone calls and inquiries and threats.

The power of the business community to get the kinds of regulatory and legal results they wanted has continued to escalate at a remarkable rate, and it seemed to me there was some relationship between that political power to get the rules and the laws they wanted, and widening inequality.

Q: What are some of the ways we see this market power in our own lives?

Another example would be the pharmaceutical industry. Americans pay more for pharmaceuticals than do the citizens of any other advanced country. Why? It’s not simply because U.S. companies do the most research, and in fact lately U.S. companies have been doing very little research. Rather, it’s because the rules and laws governing pharmaceuticals here allow companies to do things they’re not allowed to do in most other countries, like pay the manufacturers of generics to delay the introduction of generic equivalents beyond the point where the patents have run out.

These areas—Internet connections, pharmaceuticals, bankruptcy protections—they touch on the heart of where the middle class is stretched. Even food: Crop prices are down at least 6% from what they were 10 years ago, and yet food prices have been increasing much faster than inflation. That’s largely because of the market power of some very big food processors.

Q: To counter this political power, you encourage people to organize and unite against it. But people often vote against their own economic interests, and the electorate is fractured and angry at the moment. What could compel people to unite?

A: This isn’t new. People for decades, if not centuries, have sometimes voted against their economic interests. One reason is that demagogues have scapegoated minorities, and persuaded the majorities that their economic problems are due to those minorities. This divides people by race or ethnicity or religion and takes their minds off their common economic concerns.

I would be very pessimistic were it not for the fact that there were at least three or four periods where the U.S. has developed the kind of countervailing political power necessary to reverse this vicious cycle of wealth and power. But most of the sources of countervailing power that developed in the post-World War II era have now declined, including labor unions. So what do we do now? I think that the only hope is a fifth cycle of countervailing power, a tipping point marking the public’s outrage with the establishment and the status quo.

Q: Economists have been documenting inequality using various measures, but I haven’t seen much documentation of this issue of power. Is that because it’s hard to quantify and measure?

A: One thing that surprised me is how reluctant political scientists and economists are to get into this field. Economists look at market power and monopolies, but the other areas I’ve talked about—this vicious cycle of compounded wealth and power that changes the rules of the game—economists are really not taking it on.

The theoretical economists could easily develop theories about this that could enable the empirical economists to do more empirical work to see whether the theories were justified. What I’ve tried to do is provide a framework for both the theorists and the empiricists. If you don’t look at power, you’re missing a big part of the puzzle.

What Market Swings Mean for Inequality

Nobel Winner Angus Deaton: ‘I Both Love Inequality and I’m Terrified of It’