Quit My Job? At My Age? In This Industry? – Real Time Economics

In Monday’s Wall Street Journal, we took a look at how the collapse in job turnover has held back the economic recovery in general and the careers of young workers in particular. Even though the economy has now regained the number of jobs lost during the recession, key measures of job churn such as hiring and voluntarily quitting a job have yet to fully recover. 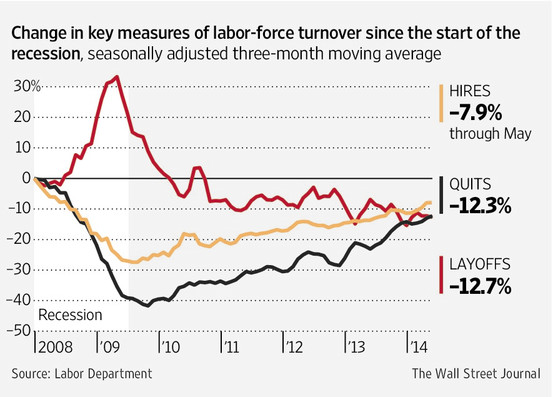 Several caveats are in order, however. Although quitting and hiring are still below their pre-recession levels, they’ve made considerable progress in recent years. The amount of monthly hiring and quitting fell by nearly 30% and 40% respectively, back in 2009, and have now recovered to just about 10% shy of their old levels. And the number of layoffs is lower than it was at the end of 2007. It’s still difficult to get hired but at least the odds of getting laid off are at their lowest level in years.

The lack of churn in the job market disproportionately affects the young, who are most likely to be seeking jobs as they first enter the labor force, or seeking to switch jobs to find a better career. Older workers stay in their jobs far longer than the young. (Unsurprisingly, there’s also evidence that quitting a good job is quite a bit different than quitting a bad job.) 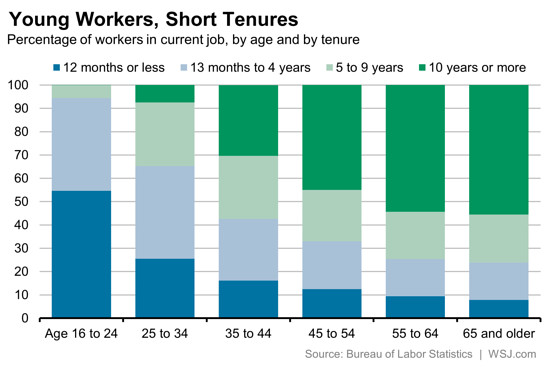 It’s also important to note that quitting a job, in order to advance your career, is not nearly as common in all industries. Certain industries always have a higher percentage of quitters than others. Among the largest industries by employment, leisure and hospitality and professional and business services are the industries where quitting is most prevalent. Government and manufacturing are the industries with the least quitting. So is it time to quit your job? If you’re a young worker in professional and business services quitting for a new job is likely to make a lot more sense than for an older government worker. 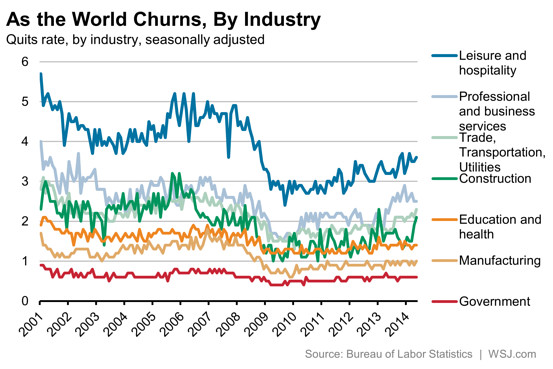