One year ago Desiree Burch swapped New York for Streatham.

It’s been some 12 months for Burch. Her play, Tar Baby, was shortlisted for the Amnesty International Freedom of Expression award and it also picked up a Fringe First award from The Scotsman in Edinburgh. Then, she won the Funny Women award — the competition which helped highlight Sarah Millican, Sara Pascoe and Katherine Ryan, among others.

As these accolades suggest, both standup and theatre are of equal importance to Burch. After growing up in LA she went to Yale to study theatre, but as she says, “I focused on solo performance which lends itself to standup — well, if you are funny — because you are telling stories in a funny way”.

Once in New York, she found standup gave her more freedom to perform what she’d written herself, but more recently she’s found it’s London that’s brewed a special atmosphere for those on stage: “There is a stronger drinking culture — and that is necessary for the arts. I really do feel it gets people out with their friends and wanting to see and experience new things.”

Nonetheless, no-one needs to go anywhere to hear Burch in her most popular acting role. It is with some understatement when she says of hit podcast Welcome to Night Vale: “It is pretty well known.”

A year after Welcome to Night Vale started, it was top of the US podcast lists and was most recently made into a novel. Indeed, at the time of this interview Burch was returning to London from the first Nerdcon stories convention in Minneapolis, where she’d taken part in a live discussion.

Night Vale is best described as a spoof local community radio show about the warped world of the titular small town. There’s something of Twin Peaks about it and there’s a blend of gothic sensibility with dark absurdist humour. Such is its appeal that fans are completely immersed in the world created. Burch plays the former Mayor of Night Vale, Pamela Winchell: “She is both utterly brilliant and totally bonkertron all at once. Immensely, or at least mysteriously, powerful — or she gives off that impression. She’s the ultimate politician.” 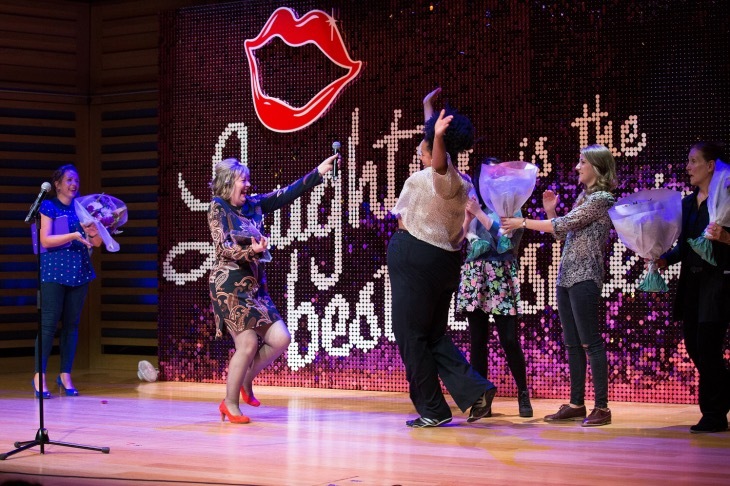 In a very different way, politics informs Burch’s own work. And her love of those twin art forms of comedy and theatre coalesce in Tar Baby, which takes aim at the idea of a ‘post-racial’ society — essentially it’s about the whole history of race in America.

Set in a carnival of a bygone age, Burch leads the audience with comedic storytelling and personal stories to explore racism’s influence on the personal and political. Burch toys with audience expectations of a play about a serious topic: “I would say Tar Baby had to be in the theatre category because of the nature of the show. My previous show was plagued by theatre people saying ‘oh this is comedy’ and comedy people saying ‘oh this is theatre’. But, I like making work that blurs the line.”

Can such an ambitious work really ever affect change though?

“Laughter is a violent physical reaction but it’s also a social thing, people relate and are empathic — ‘someone gets me’ — and then someone’s underbelly is exposed, and [a comedian] can say other things too. Changing someone’s point of view changes that person’s world, and I think we’ve all had those experiences where we look back and think, ‘oh now I understand that.’

“It is a soft change but I think that it is the only kind that sticks. And, if it can’t change someone’s mind, at least someone else with a shared point of view feels they have been heard.”

Tar Baby plays at the Vault Festival in early 2016, full details to be confirmed.