LONDON—The Bank of England should begin raising borrowing costs sooner rather than later if it is to ensure that future increases in interest rates will be smooth and gradual, one of the U.K. central bank’s nine rate-setters said Wednesday.

Ian McCafferty, one of four members of the BOE’s nine-person rate-setting panel drawn from outside the central bank’s ranks, said in a speech that gradual and limited interest-rate rises are “a critical element” of the central bank’s guidance on its future decisions. Delaying the first rate rise too long may necessitate a faster increase in borrowing costs in future to keep inflation in check, he said. 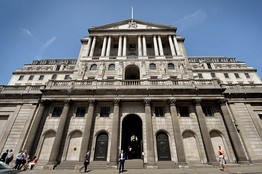 The Bank of England in London.
Associated Press

“Such gradualism is more likely to be delivered if we start sooner rather than later. Delaying the start of normalization risks a greater monetary policy response later on,” Mr. McCafferty told business leaders in Liverpool, England, according to a text of his remarks.

Mr. McCafferty voted alongside fellow rate-setter Martin Weale in August to raise the BOE’s benchmark interest rate from a low of 0.5% and has stuck with that call for the following three months. His decision at December’s policy meeting will be published in the official minutes on Dec. 17.

He said in his speech that he’s concerned that the slack in the economy that usually keeps inflation in check is disappearing fast and that recent falls in commodity prices could mask a pickup in domestic inflationary pressure. Annual inflation was 1.3% in October and is predicted to sink further in the coming months.

Mr. McCafferty and Mr. Weale have yet to convince the remaining seven members of the BOE’S Monetary Policy Committee to back their call for higher rates. Investors expect the central bank to lift borrowing costs from historic lows in late 2015 or early 2016.