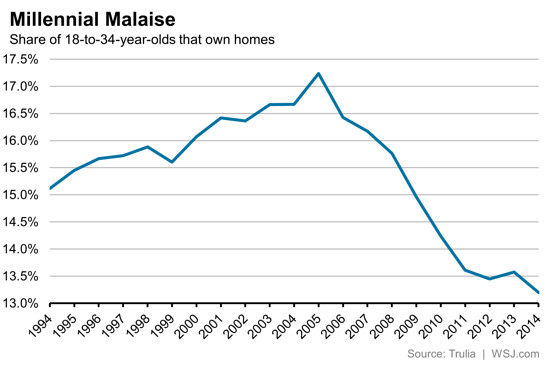 Last week, an annual Census Bureau survey showed that the U.S. added just 476,000 households in the year ended in March, compared with an average of 1.3 million in each of the prior two years.

Either way, for the most recent year, both surveys “show disturbingly slow growth,” said Thomas Lawler, an independent housing economist in Leesburg, Va.

The surveys may help shed light on why the housing market hasn’t recovered as steadily as many had expected over the past year. Sales and construction of new homes are barely running ahead of last year’s pace, though the vacancy rate for professionally managed apartments has fallen to a 13-year low, according to real estate data firm Reis Inc.

Additional calculations of the same annual survey from Jed Kolko, chief economist at Trulia, show that the U.S. population grew by 2.3 million last year. If household formation continued at the rate of the past few years, the U.S. would have added 1.2 million households last year. Instead, Mr. Kolko’s calculations show it added just 425,000—and nearly all of them were renter households.

Mr. Kolko found that the share of young adults living with their parents ticked down last year, which is good news. The bad news: They didn’t form their own households, perhaps moving in with other relatives or friends. This helps explain why the homeownership rate for 18-to-34-year-olds continued to fall last year.

Indeed, the data had pointed to signs that the homeownership rate for millennials had stabilized last year after accounting for the growth in renter households. But Mr. Kolko said the latest survey shows that the millennial homeownership rate declined against last year. Around 13.2% of 18-to-34-year-olds owned homes in the year ended March 2014, down from a peak of 17.2% in 2005 and 13.6% in 2013.