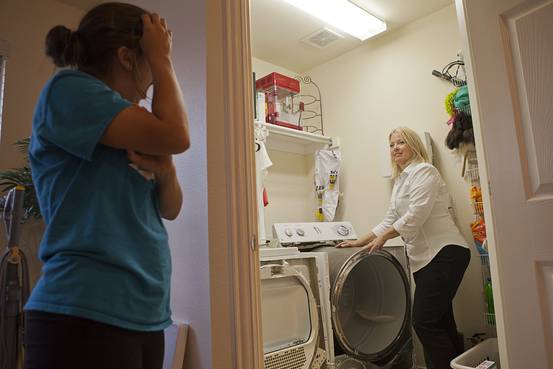 Dona Stone, in Rowlett, Texas, watches online videos to learn to repair her own appliances. “It’s empowering to know I can fix my own stuff,” she says.
KAEL ALFORD FOR THE WALL STREET JOURNAL

Hell hath no fury like an appliance owner scorned.

A recent story in The Wall Street Journal about appliance repairs triggered emails from readers. The story examined how consumer spending on appliance repair services has fallen, in part because consumers are repairing appliances themselves instead of relying on professionals. Readers recounted tales of repairmen who were late, messy or did not bring the right replacement part. “Thank you for letting me know that my husband and I aren’t alone or crazy in dealing with broken household appliances over the past few months,” wrote Barbara Weber of Baton Rouge, La.

Another complaint was the lack of replacement parts, including electronic components, for older models. Reader David Lilienfeld of Foster City, Calif., wrote about a seven-year-old broken Whirlpool microwave. “When we tried to repair the microwave, which would spontaneously turn itself on, the repairperson told us that the part we needed was no longer available,” he wrote. 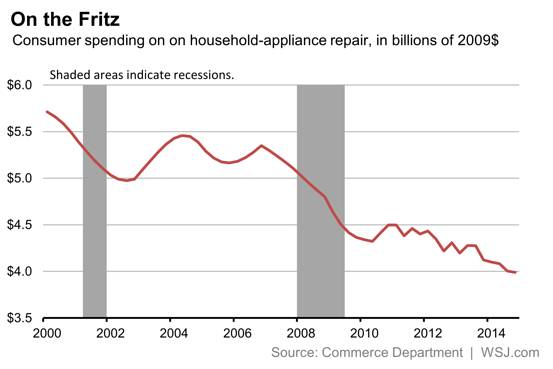 Complaints about poor service might not be a big deal except for one fact: The U.S. economy is overwhelmingly a service economy. Service output accounts for 67% of nominal gross domestic product, according to Commerce Department data, while manufacturing generates just 12.5%. If service providers aren’t working at their best, the economy is losing out on productivity and revenues.

Experts on customer service, however, say service has not so much deteriorated as evolved.  Like so many other aspects of the economy, technology has changed how businesses deliver service to their customers.

“Businesses are getting us to do more of our own customer service,” said David VanAmburg, managing director at American Customer Satisfaction Index, which polls consumers on their satisfaction with various products and companies.  Consumers have adjusted to pumping their own gasoline and packing their own groceries. Now, companies want customers to go online to have questions answered and problems solved.  He said businesses are spending more to improve websites and less on traditional customer service such as call centers.

“The change is welcomed by some and not welcomed by others,” said Mr. VanAmburg, who noted older consumers are less likely to give a thumbs-up to Internet-based service.

Andy Fromm, chief executive of Service Management Group, a service consulting firm, also doesn’t think service has eroded that much. In many respects, he said, services have improved thanks to technology and innovation. “I can get a lot of services that are fast and customized,” he said. That includes overnight delivery of retail merchandise and special-request food orders at restaurants. “We take it all for granted,” he said.

Still, Mr. Fromm said appliance repair might be an example of the challenge for companies, since it involves more one-on-one interaction between the repair professional and consumer.

Mr. VanAmberg agreed.  He said ACSI proprietary surveys done for durable goods manufacturers show an increased level of consumer satisfaction with the goods themselves, but satisfaction with follow-up services? That has fallen off over time.