The top U.S. association for Realtors and that for home builders agree more home construction is needed to keep pace with job growth. What they don’t agree on is how much.

The National Association of Realtors released a study Tuesday finding that 32 states and the District of Columbia saw a disproportionate amount of job growth in relation to home construction in the past three years. That, the Realtors group says, will lead to housing shortages and rising home prices in those markets. 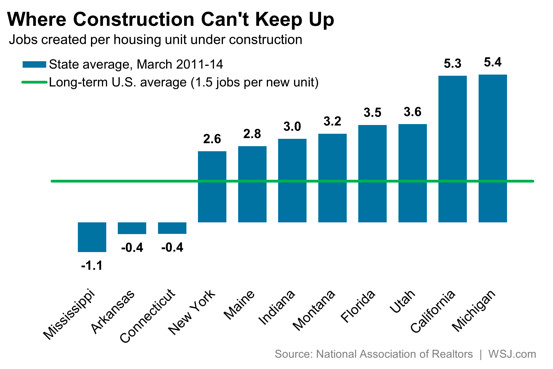 The study’s release is timely after Friday’s jobs report from the Labor Department showed the U.S. finally has reclaimed the employment peak – 138.5 million jobs – set during last decade’s upswing.

In its study, the Realtor group noted how builders since 1960 constructed a ratio of one single-family home for every 1.5 jobs created on a national basis. Yet, in the past three years, several states, led by Michigan, Florida, Utah, California, Montana and Indiana, produced jobs in excess of that ratio, the study found.

Michigan, with a resurgent auto industry, saw the biggest disparity at 5.4 jobs created for every one house built. Next were California, where construction is restrained by stringent review processes, at 5.3 and Utah at 3.6.

Lawrence Yun, the Realtor group’s chief economist, said such disparities will create or exacerbate housing shortages in those markets and further fuel price increases unless home construction picks up. Nationally, the median price of an existing home registered $201,700 in April, up 5.2% from a year earlier.

“In California, I think the housing shortage will persist, so it will continue to put (upward) pressure on prices,” Mr. Yun said. “In places like Florida and Utah, it is possible that builders could quickly ramp up, which means that home-price growth in those states could tame down very quickly.”

Meanwhile, the National Association of Home Builders doesn’t dispute more home construction is needed. After all, construction starts for single-family homes this year are at a pace of roughly 65% of their annual average of 1 million starts since 2000, U.S. Census Bureau data show. But David Crowe, the builder association’s chief economist, noted a few issues with the Realtor data.

First, the Realtor study doesn’t factor in apartments and condominiums, a popular destination in recent years for young workers. Construction starts for multifamily homes registered 293,700 last year, the highest since 2005. The pace is quickening this year: In April, construction starts were at a seasonally adjusted annual pace of 413,000.

Second, the builders group finds a more reasonable ratio of home construction to job growth would be one new home built – single-family or multifamily – for every two to three jobs created. By that measure, more states likely are within the ideal range.

Finally, it is possible that a number of jobs created over the past three years went to unemployed That’s not to say that the current pace of home construction is adequate. Rather, several factors have hindered the industry, including high land prices and limited availability of build-ready lots. Another factor is a conscious strategy by many builders to focus on building higher-priced homes to cater to the better-heeled borrowers who can qualify for a mortgage these days. That translates to building fewer homes, but still posting ample profit margins.

The big question now in the home building industry is when builders will conclude that they’ve exhausted the higher-end market and thus will switch to building a greater volume of more affordable homes. For the time being, most are waiting to see even better job growth, wage increases and more demand from the market’s lower end.