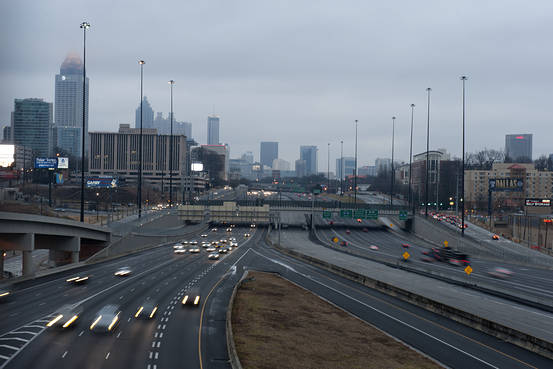 The “exurbs” of Atlanta are among those growing again.
Getty Images

With the recession’s impact fast receding, Americans are finally returning to the suburbs—and beyond.

The population of U.S. counties that represent the “urban cores” of large metropolitan areas—inner cities and dense, inner suburban areas—grew just 0.73% between July 2013 and July 2014, down from a growth rate of 0.90% the previous year, according to an analysis of new data from the Census Bureau by William Frey, a demographer at the Brookings Institution. The year before, this growth rate also dropped, from 0.97%.

Suburbs of large metro areas, by contrast, are seeing their growth rates increase. The population of newer suburbs grew 1.20% last year, Mr. Frey’s analysis shows, up from 1.11% and 1.01% in the two prior years.

Perhaps most interesting: So-called exurbs—the peripheral parts of metro areas far from inner cities—saw population growth of 0.87% last year, up from 0.56% the previous year. This rate is now higher than the growth rate for inner cities. (Mr. Frey studied U.S. counties in metro areas with at least 500,000 people.)

“The recession’s influence on migration is diminishing,” said Ken Johnson, a demographer at the University of New Hampshire, who analyzed the data and found similar trends. “Migration patterns may be reverting to those common before the recession.”

Suburban counties of big metro areas, including fringe areas that tend to contain newer suburbs, are seeing significant inflows of domestic migrants, Mr. Johnson says— a trend more consistent with what prevailed during the 2000s. For decades, Americans have moved to the suburbs in search of bigger homes and better schools.

During and after the U.S. housing crash and 2007-09 recession, this became much harder to do: Many Americans lost their jobs, inhibiting mobility, or couldn’t get enough hours at work; others fell behind on home payments, or lost their homes.

At the same time, as city crime rates have fallen, more young adults, especially the highly-educated, now prefer the life-style amenities of downtowns to the white-picket fences their parents prized. (Or at least, they appear to do so now; they’re also delaying having children, which, due to a chronic lack of larger living spaces in inner cities, tends to push people to suburbs.)

The Great Recession, along with, to some extent, these changing living preferences, have for years slowed the nation’s movement to suburbs, though flows into suburbs each year still greatly exceed flows into inner cities. (Despite the common misperception that everyone is moving to cities, between 2013 and 2014, suburbs saw a net gain of 2.2 million people; “principal” cities saw a net loss of 1.7 million.)

Now the nation’s migration trends are shifting back a bit.

Last spring, Census data on America’s biggest cities and metropolitan areas suggested that suburbs were starting to regain their appeal. In December, statistics on U.S. state populations for 2014 showed a generalized uptick in moving, along with renewed flows to the nation’s Sunbelt.

This spring, fresh data from Census will provide an even clearer picture of the nation’s cities and suburbs. “We could for the first time in four years see a return to the more classical suburban-growth advantage nationally,” Mr. Frey said.

Signs of a Suburban Comeback

The Long-Distance Relationship Between Americans and Jobs