Among a trove of documents and other exhibits on display at the Bank of England to mark the centenary of the outbreak of the First World War are a few that shed light on the close relationship between Britain’s central bank and its U.S. counterpart, the Federal Reserve.

The two central banks were the dominant institutions in the international monetary system at the time and would play a critical—-and controversial–role in rebuilding the global economy in the years that followed the conflict. 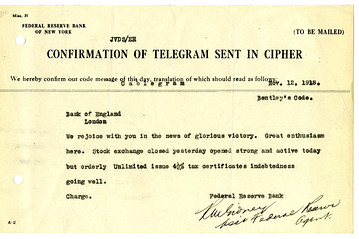 A telegram from the New York Fed on Nov. 12, 1918, to the Bank of England, congratulating Britain on its victory in World War I.
Bank of England

Included in the exhibits is a telegram from the New York Fed to the Bank of England dated Nov. 12, 1918, the day after the war’s end. The single word “rejoice” can be made out in the enciphered text. An accompanying, uncoded confirmation reads: “We rejoice with you in the news of glorious victory. Great enthusiasm here.”

More touching still is a handwritten letter from Benjamin Strong, then the head of the New York Fed, to Bank of England officials in charge of commissioning a memorial to BOE staff killed in the war. More than 400 of the bank’s 1,300 staff served in the conflict; 71 lost their lives.

Mr. Strong enclosed a check and asked for the cash to be added to the memorial fund. He asked the money be spent on flowers if the fund was open only to bank staff.

“I am asking you to do this as a tribute from an American friend who shares your pride in what these good men of yours did for their country and ours,” Mr. Strong wrote. Sculptor Richard Reginald Goulden’s memorial, of St. Christopher carrying the infant Christ, stands in the BOE’s garden court to this day. 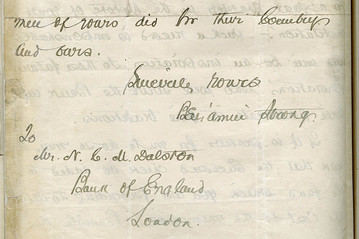 A letter from New York Fed chief Benjamin Strong asking to contribute to a memorial fund for BOE staff who had lost their lives in World War I.
Bank of England

The exhibition also features accounts of wartime derring-do. A note to a man called Hugh Carson Andrews from a BOE official asks him to present himself at the bank at 9 am the next morning with luggage for 10 days to go on a “secret mission.” Mr. Andrews subsequently accompanied gold shipments to JP Morgan in New York to pay for the war effort.