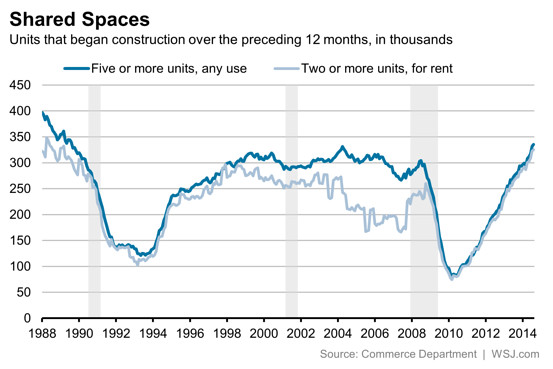 Housing construction dipped in August, driven by a 32% drop from July in the notoriously volatile multifamily sector.

But beyond the month-to-month noise, the trends haven’t changed. Apartment construction over the past year climbed to a new 25-year high.

Single-family housing permits through August are running exactly in line with last year’s pace, the Commerce Department reported Thursday. Hopes for a big pick-up in single-family construction, which some economists at the beginning of the year had said would propel the economy to the ever-elusive 3% annual growth mark this year, haven’t materialized.

And despite the slide in the seasonally adjusted annual figure for multifamily construction in August, the picture looks different if you look back over the past year. The rental market is booming. Construction of new rentals hasn’t been this high since 1989.

Wait a minute, some might say. How do we know that all of these structures are necessarily rental apartments?

Third quarter figures aren’t available yet, but in the second quarter, some 94% of units in buildings with two or more structures were being built for rent. That is close to the highest level since record keeping began in 1974; the share hit 95% in the spring of 2011.

During the second quarter, the number of units built for rent in buildings with at least two units also reached its highest level since 1989.