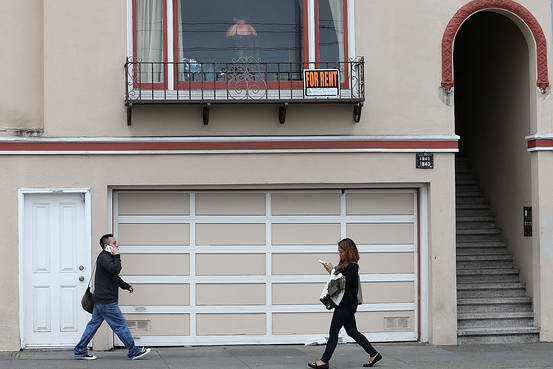 Renters’ confidence is especially weak in strong markets, such as San Francisco, where rising home prices and high rents have made it difficult for younger buyers to save for down payments.
JUSTIN SULLIVAN/GETTY IMAGES

Renters are losing faith that they will be able to buy a home in the next year, a worrying sign that the housing market won’t get a boost from new buyers anytime soon, according to a new report by Zillow.

Some 4.9 million renters say they plan to buy in the next year, down from 5.2 million in January, according to the property-market database company.

Renters’ confidence is especially weak in strong markets, such as San Francisco and Denver, where rising home prices and high rents have made it difficult for younger buyers to save for down payments. In San Francisco, 5% of renters between the ages of 18 and 34 said that they planned to buy a home within a year, compared with 18% when they were asked in January.

As wages and job growth have strengthened, many economists expected 2015 to be the year when younger adults finally made a delayed transition from renting to owning. The Zillow survey suggests that those buyers are unlikely to emerge now until at least well into next year.

The lack of first-time buyers is worrying because without new homeowners, the housing market is just recycling existing owners and isn’t contributing to economic growth. Economist blame the stubborn absence of new buyers on the lack of more affordable inventory and struggles to save for a down payment when many are pouring a huge portion of their incomes into rents.

In contrast to pricey markets like San Francisco, in Philadelphia, where home prices are flat, 23% of younger renters said that they planned to buy in the next year in July, up from 1% in January.

“We keep hearing stories about people in San Francisco wanting to move to Portland or Seattle because they can’t afford San Francisco anymore,” said Svenja Gudell, chief economist at Zillow.

In San Francisco, 40% of respondents said it was a good time to buy, compared with 45% in January.

“I think the fact that overall the market is slowing down always scares people a little bit when they read the headline,” Ms. Gudell said.