Renters Will Continue to Struggle for the Next Decade, Harvard Study Says – Real Time Economics 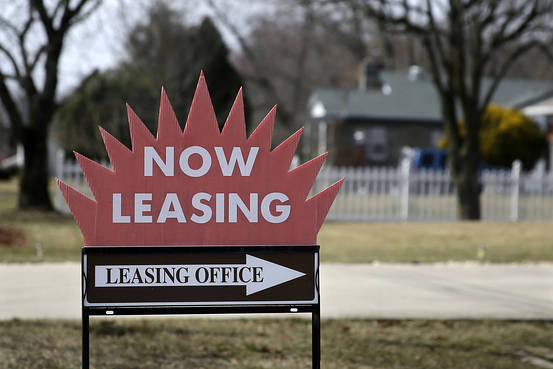 An estimated 11% more households will pay more than half of their incomes in rent in 2025, according to a new report from Harvard University’s Joint Center for Housing Studies and Enterprise Community Partners.
MEL EVANS/ASSOCIATED PRESS

Renting is unlikely to get easier anytime soon.

An estimated 11% more households will pay more than half of their incomes in rent in 2025, according to a new report from Harvard University’s Joint Center for Housing Studies and Enterprise Community Partners, an affordable-housing organization.

The situation could have significant policy implications. Renters who are severely cost-burdened—meaning they pay more than 50% of their incomes in rent—often require federal subsidies to find an affordable place to live. The private sector is struggling to produce profitable housing that is affordable to lower- and moderate-income families, while many federal housing subsidies have been cut in recent years.

In 2013, one in four renters, or 11.2 million households, paid more than half of their incomes in rent. That is three million more households than in 2000. 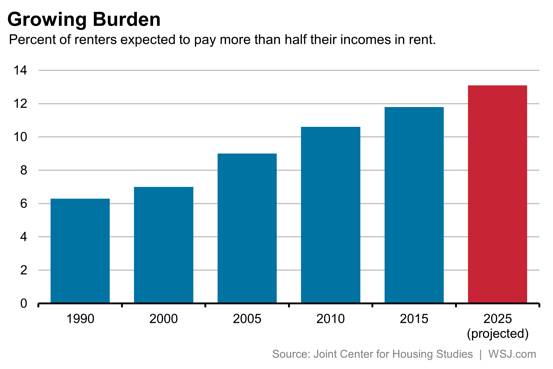 Many of the factors contributing to that rise were considered temporary. Millions lost their homes due to foreclosure and saw their incomes stagnate during a sputtering economic recovery. But the report finds other factors that have put a strain on renters are likely to persist and contribute to longer-term challenges.

Rapid growth in the Hispanic population is one such pressure, because Hispanics tend to be disproportionately renters and are more likely to pay a large share of their incomes in rent, thus putting more pressure on the existing supply of affordable rental housing.

Millennials—the population currently in their mid-20s and early 30s—are also expected to grow and continue to rent in larger numbers than prior generations. Many of those young adults entered the job market during and after the recession, meaning many were unemployed or underemployed for crucial early years of their careers, and are more likely to struggle to afford housing, the report says.

“The bottom line is that we are not likely to see demographic forces help, but more likely hinder the issue of affordability,” said Chris Herbert, managing director of the Joint Center for Housing Studies.

The report looks at a range of three predictions. The middle-of-the-road scenario assumes that incomes and rents rise with inflation and looks primarily at growth in populations that tend to be rent-burdened, such as older adults and Hispanics. In that scenario, the report’s authors expect the number of burdened households to grow to just over 13 million in 2025 from an estimated 11.8 million in 2015.

If rents continue to grow faster than incomes—as they have over the last 15 years—the number of severely burdened households could rise by as much as 25%.

If instead incomes outpace rents, there could be modest improvement, with the number of severely burdened households dropping by just over 1%. “Even after a decade of solid income growth, we would be no better off than we are today,” Mr. Herbert said.

To be sure, other groups are more optimistic about how demographic shifts will affect housing. The Mortgage Bankers Association, for example, expects homeownership rates to rise, easing pressure on the rental housing stock.

Years After the Real Estate Crash, Renters Are Still on the Rise

Where Rents Are Eating Up a Bigger Share of Incomes

Homebuyers to Make Comeback in Next Decade