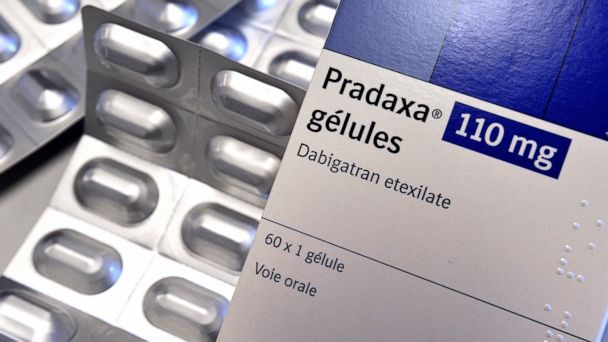 A scientific study released Wednesday suggests the makers of the blood thinner Pradaxa may have held back information that may have prevented serious bleeding complications among some of the million or so Americans using it.

Boehringer Ingelheim introduced Pradaxa in 2010 as a replacement for the older drug Coumadin, which had been in use for decades. A major selling point was that Pradaxa offered the benefits of stroke prevention without the hassle of frequent blood monitoring needed with Coumadin.

As with any blood thinner, the concern with Pradaxa was the increased risk of bleeding in patients taking it. Major bleeding with Pradaxa at its currently recommended dose occurs in 3.11 percent of patients taking it each year, according to the major trial that led to FDA approval of the drug. The total incidence of bleeding events with use of the drug, including minor and major bleeding, is 16.42 percent per year.

Research on Pradaxa suggests that it carries a lower risk of bleeding into the brain than Coumadin does, along with a lower risk of life-threatening bleeds and minor bleeding. A large Medicare study published in May confirmed prior knowledge that Pradaxa carries a higher risk of major stomach and intestinal bleeding events.

Researchers at the University of Ottawa’s Institute for Safe Medication Practices (ISMP) wanted to find out whether monitoring the levels of Pradaxa in the blood of patients using it would help doctors avoid bleeding complications. To do this, they looked at Boehringer Ingelheim’s own data exploring the impact of blood level monitoring in conjunction with Pradaxa use.

These researchers said the data show that up to 40 percent of all deaths and serious bleeding events related to Pradaxa could have been avoided by simple blood testing. Checking blood levels periodically, they said, might have allowed doctors to lower the dose of Pradaxa or temporarily stop it in patients with dangerously high levels. This in turn might have prevented some bleeding complications. The paper was published Wednesday in BMJ.

Additionally, the researchers say that Boehringer Ingelheim had this information before Pradaxa was approved in 2010, but that they left it out of the safety information presented to the FDA during the drug’s approval process. Specifically, they said they found internal reports showing that the company’s scientists raised safety concerns about serious bleeding, but that these concerns may have gone unheeded by their superiors

In a statement released Wednesday, Boehringer Ingelheim said that the simulations that served as the basis for these concerns were preliminary and not reliable, and that it would have been inappropriate to report the simulations. They said they did provide the raw data to the FDA.

When asked by ABC News, the FDA declined to comment on the BMJ report. It also did not say how often pharmaceutical companies choose not to report the results of simulations like these to regulators.

This May, Boehringer Ingelheim reached a settlement worth $650 million with about 4,000 people related to alleged bleeding problems with Pradaxa.  In a statement released in connection with the settlement, Boehringer Ingelheim’s counsel said the company stands behind that drug and believes the claims lacked merit, but decided to settle to avoid protracted litigation.

The study authors, Drs. Thomas Moore, Donald Mattison and Michael Cohen, have extensive backgrounds in drug safety, representing the senior leadership of ISMP. Moore and Mattison have testified against pharmaceutical companies in prior litigations and Mattison also works for a risk management firm.

Moore, the lead scientist behind the ISMP study, said the problem is that blood levels of Pradaxa can vary significantly from patient to patient. Even if both take the same dose, one person’s blood level could be more than 400 times higher than another’s.

Moore said he turned his attention to Pradaxa in early 2011, the first few months after it was approved by the U.S. Food and Drug Administration.

In those three months, there were 505 cases of significant bleeding linked to Pradaxa, according to ISMP data, compared to 176 cases of bleeding related to Coumadin during the same period. “The biggest surprise to me was that the FDA, which is overall an excellent safety regulator, chose to almost entirely ignore opportunities to reduce the bleeding risk of this treatment.”

According to the report, the information allegedly withheld by Boehringer Ingelheim at the time may have affected the drug’s chances of approval. As evidence, the report offers a 2011 draft of the company’s study on the drug. In it, the investigators note, “Monitoring of plasma concentrations or antithrombotic activity… would be required to identify these patients,” referring to those who would potentially have dangerously high blood levels of the drug even under normal dosing situations.

According to the new report, this information was omitted from the formal presentation to the FDA. The authors of the new report say emails sent between Boehringer Ingelheim employees show that the company knew that advertising the need for blood monitoring with Pradaxa would drastically reduce the number of people who used the drug instead of Coumadin.

In a statement released in response, Boehringer Ingelheim called the BMJ article biased and misleading. The company said the drug is safe , and that the report could lead to patients going off of their medications and potentially putting their lives at risk. The company further noted that the “FDA reaffirmed Pradaxa’s positive benefit-risk profile” following a study of 134,000 Medicare patients with atrial fibrillation.

“Boehringer Ingelheim made a robust effort to find ways to utilize plasma levels to further improve the risk/benefit profile of Pradaxa and it is irrational to suggest otherwise,” said Dr. Sabine Luik, Boehringer Ingelheim’s senior vice president of Medicine & Regulatory Affairs, in the release. “The truth is the totality of scientific evidence does not support dosing decisions for Pradaxa based on blood levels.”

The FDA stands by its communication from May of this year stating that Pradaxa has a favorable benefit-to-risk profile and there are no plans to change the labeling of the drug to require or recommend blood monitoring.

Dr. Sonal Singh, a Johns Hopkins cardiologist who was not involved with the BMJ report, said that though it raises important questions, it is too early for a final verdict on Pradaxa or the actions of Boehringer Ingelheim.

“We still don’t understand who bleeds,” he said. “Is it older people, are they younger people…the specificity questions have not been answered.”

Regardless of what this new report tells us, Pradaxa is a useful – and often life-saving – drug for those who take it. Importantly, this report should not cause people to stop taking their needed medications.

What the report does offer is an opportunity for patients to discuss their treatment and their concerns with their doctors. As with most conditions, there are options for treatment. Only through a one-on-one discussion with a medical professional can you determine the best treatment choice for you.