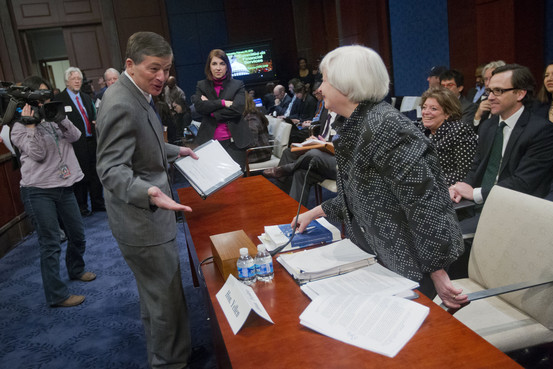 The Federal Reserve is facing pressure to reveal the results of an internal investigation into a 2012 leak of market-sensitive policy deliberations of the Federal Open Market Committee.

In a letter to Fed Chairwoman Janet Yellen, Congressman Jeb Hensarling (R-Texas), chairman of the House of Respresentatives’ Commiteee on Financial Services, expressed “concern for your lack of response to a letter sent to you by the Oversight and Investigations Subcommittee of the Financial Services Committee on February 5, 2015.”

Mr. Hensarling says that letter requested all records regarding the investigation of the leak, which has also raised eyebrows among top Democrats.

“It appears that proper internal controls are not in place to safeguard the confidentiality of FOMC meeting minutes,” Mr. Hensarling wrote in his letter, first reported by Bloomberg News.

In a key development, Mr. Hensarling referred to the probe as a criminal one, saying the Fed’s general counsel dropped the investigation “at the request of several members of the FOMC.” Later, Mr. Hensarling added, the investigation was reopened by the Fed’s Office of Inspector General in March 2013 “only when that office was approached on the matter by a confidential informant.”

According to the press reports, the Fed’s investigation involved alleged leaks of sensitive information to market research firm Medley Global Advisors and The Wall Street Journal. The press reports said the leaks involved detailed accounts of the Fed’s September 2012 policy discussion, including hints about possible action at their December gathering.

At that meeting, the Fed announced a new policy in which it promised to keep interest rates near zero until unemployment fell below 6.5%, as long as inflation was forecast to remain in below 2.5% over a one- to two-year horizon.

Mr. Hensarling said in his letter that Congress is “committed to holding the Federal Reserve accountable for its actions and omissions, and to ensuring transparency in its operations.”