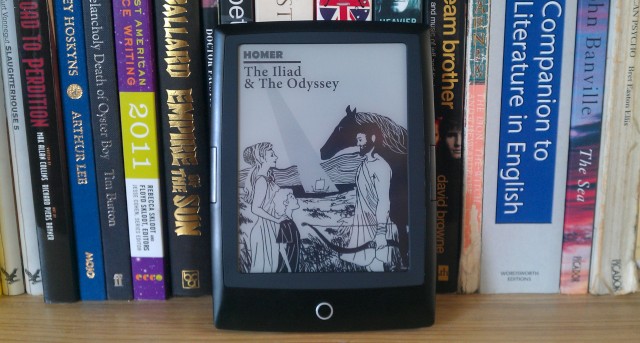 Looking for a digital page-turner but don’t like the sound of Amazon’s Kindle or a pricey tablet device? Bookeen’s Cybook Odyssey boasts an E-Ink screen, touchscreen controls and one of the nicest designs we’ve ever seen for an eReader. But does it have the overall polish of the bigger names? Read on to find out.

Bookeen’s Cybook Odyssey is the company’s second attempt at putting together a touchscreen eReader device after their first so-so effort with the Cybook Orizon. While eBook readers were ten-a-penny back then, the Odyssey enters a market where now even touchscreen controls are hardly unique, with Amazon, Sony and Kobo all selling finger-friendly offerings.

The Odyssey however stands out from the crowd thanks to a very attractive design. Using a black casing that’s made of both plastics and an aluminium metal backplate, it’s a premium-feeling gadget. Though heavier than many rivals at 195 grams, curved edges mean it’s always comfortable to hold. 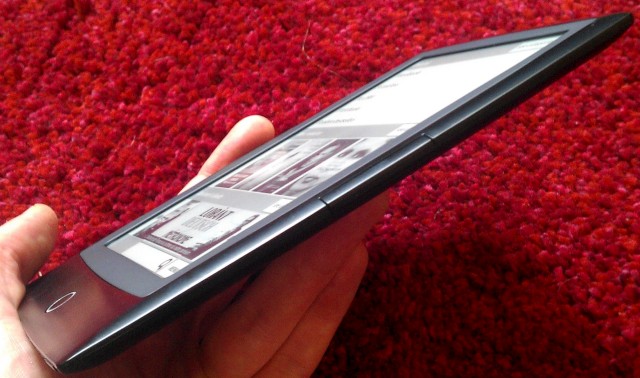 Despite offering touchscreen controls, the Odyssey keeps page turn buttons on either side of its casing, a “back-page” on the left and “next-page” on the right. You wont be able to use these physical buttons to navigate a book in one hand, as you’ll have to reach to the other side of the device to go either back a page or forward one depending on your stronger hand, but that’s not too much of a concern as tapping either edge of the screen does the job too. Below the screen is a single button that’s used to enter menus (the same can be done by tapping in the centre of the screen) and a power button sits on the top edge.

Underneath you’ll find a 3.5mm headphone jack (missing from the slimline latest Kindle) which is great if you plan on listening to audiobooks or MP3s, a microUSB slot for charging and transferring content from a PC and a microSD slot. 2GB of storage is built into the Odyssey, which is good for 600+ eBooks, but the storage expansion will be useful if you do listen to lots of audiobooks or tunes on the eReader. There’s also an accelerometer built in too, and while some have complained that this makes the Odyssey react erratically, going from landscape to portrait when you’d rather it didn’t, I had no such problems and felt it a welcome addition. 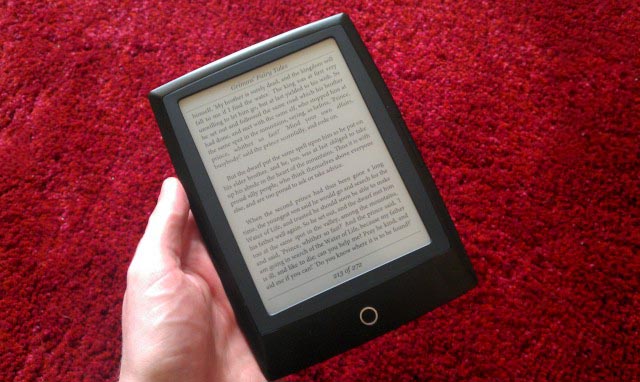 The 6 inch, 600×800 screen is E-Ink, just like those found in a Kindle or Sony reader. As you’d expect, it’s perfectly readable, even in direct sunlight, and offers good contrast ratios. The screen uses capacitive technology rather than the infra-red system used in other devices. It’s not a massive difference in practice, but it’s worth noting that if you’re using the device in the winter you’ll have to pull your gloves off, as the Odyssey requires conductive input from your fingertips in order for your commands to register.

While the Odyssey is perfectly capable of holding your attention for a comfortable read through a lengthy novel, there are other areas where it falls down. Some of Bookeen’s claims for the Odyssey are slightly off, while the software leaves a little to be desired. 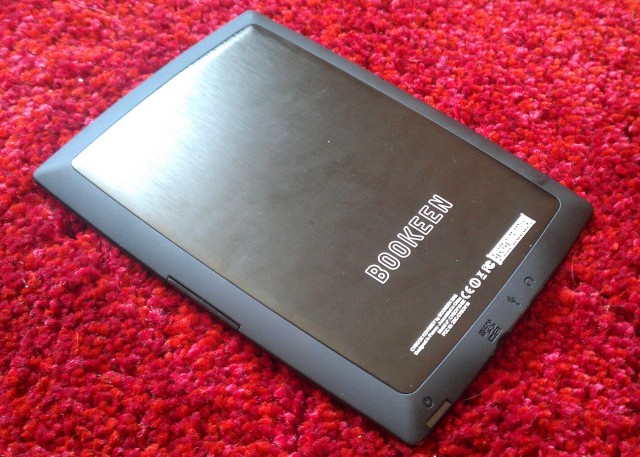 First of all, Bookeen’s claims that this is the “fastest” E-Ink reader on the market. This has to be taken with a pinch of salt. Yes, the Odyssey can fly through pages of text at a time, with the reasonably powerful 800Mhz Cortex A8 Texas Instruments OMAP zipping through menu screens, and even allowing for a few animated flourishes. You can also hold down the physical page turn buttons and jump several dozen pages in a few moments. However, this is done at the expense of a full screen refresh cycle, that moment when an E-Ink screen flashes black in order to wipe the slate clean for new information to be displayed. While the Odyssey has the option to do this, to use the super-fast features you forego a full refresh, which leaves behind messy artefacts that can at times make the screen look as though a ghost image has been left behind. It’s not a big deal as it’s optional, but it’s worth noting all the same.

More of a concern is the software. Again, it gets quite a lot right; there are plenty of font style options, numerous bookshelf/library views, pinch-to-zoom text resizing and the ability to add annotations and highlights. The onscreen keyboard is responsive and easy to use too, for an E-Ink device at least. So why then is there no English dictionary? It’s a key selling point of an ereader, not having to drag a weighty tome around with you in order to look up words, and one that you almost take for granted from the product category. But it’s missing here. Amazon’s Kindle Touch offers the superb X-Ray feature that simply lets you tap the screen to bring up both definitions and character information from within books, as well as expanding out to web and Wikipedia searches. The Odyssey seems lacking in comparison. 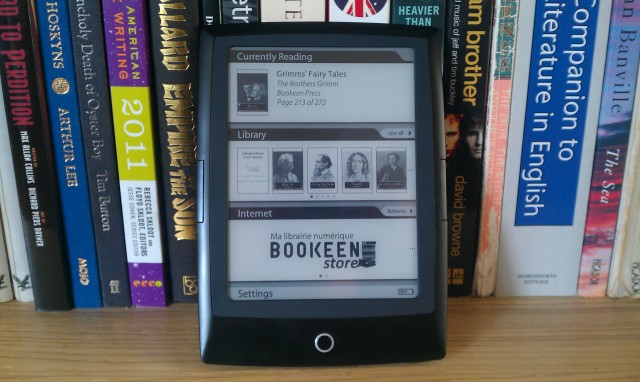 There’s a French dictionary on there though, a tip of the hat to Bookeen’s French heritage. The Francophile-friendly offering extends to the pre-installed books. Though numbering over a hundred, the majority of these are also in French. Once you’ve used the device to sign up for Adobe’s Digital Editions DRM service, Wi-Fi connectivity built-into the device lets you connect to the Bookeen eBook store too. Again, the software shows its French-speaking roots, and if you’re after something other than what you’d find in a Parisian bibliotheque, you’re going to struggle. Amazon’s Kindle bookstore again is clearly superior.

If you’re looking to get new reads onto the Odyssey, then you’re likely best served by heading over to the WH Smith or Waterstones online digital stores. You’re going to have to hook the eReader up to a third-party eBook management system on your PC like the excellent Calibre to do this though, as while the Odyssey has a built in browser, it’s clunky at best. Supporting a reasonable amount of file formats, including ePub, PDF, Adobe® DRM, HTML, TXT, and FB2 as well as picture formats like JPEG, PNG, GIF, BMP, ICO, TIF, PSD, you shouldn’t have any compatibility problems when using thrid-party eBook stores though. 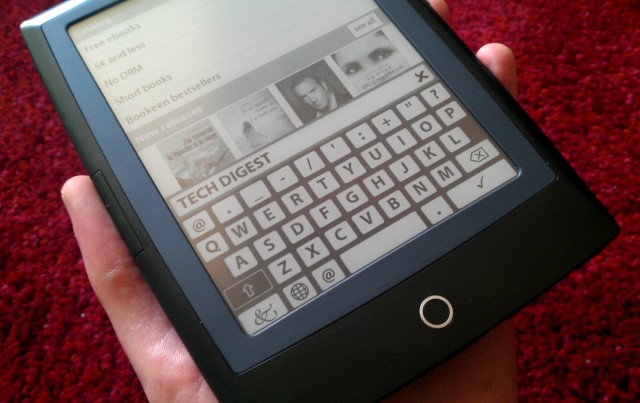 The Bookeen Cybook Odyssey isn’t a bad eBook reader. It’s got a superb industrial design, a screen as readable as any on the market and a fast processor that sees all menus and page turns fly along at a good pace. The problem is, it makes too many simple mistakes to heartily recommend. For starters, its touch capabilities could have been better used for looking up information and navigating the shoddy web browser, while its localisation efforts don’t even extend to an English dictionary. With competitors offering all the same and more at the same price point, it’s a hard sell. Pick one up if your French-speaking skills are up to scratch, but if not you’re probably better served by a Kindle Touch.