Think Giacometti and the mind immediately conjures up images of spindly figures, in fact one sold earlier this year for a record-breaking amount. But what about his portraiture? It’s a part of his work we’re not familiar with, but this show at National Portrait Gallery is all about bringing this less-admired section of his portfolio into the light.

His early works show the young Alberto Giacometti to be an accomplished sculptor and painter, but yet to find his own style. As the exhibition shows his evolution as an artist, we get to see him forging his own path both as a painter and a sculptor.

There are plenty of bronze busts were he shows his ability to experiment with form and features, clearly evident in a bust where the face seems normal in profile but is flattened to a knife edge when seen front on.

But it’s his portraits that steal the show, simply using a limited palette of often grey and white he creates visually striking works that seem to look inside of his subjects and bring out their inner emotion. When looking at these paintings, we were able to draw comparisons with Francis Bacon and his evocative style.

Giacometti could use this same style to create both intense paintings, but also more tender works. Despite the aggressive and expressive style of his depiction of his mother there is clearly a tender love conveyed by Giacometti in the portrait.

We thought we would be disappointed by the lack of slender figurative works in this show, but the exhibition shows us a different and equally brilliant side to Giacometti we were less familiar with.

Giacometti: Pure Presence is on at National Portrait Gallery (NPG) until 10 January. Tickets are £15 for adults, concessions available. Also on at NPG is the Simon Schama exhibition to accompany the television series.

For more art nearby see Goya’s portraits at The National Gallery, the political art Ai Weiwei at Royal Academy and London at Night in the London Transport Museum.

For more art in London see our top picks for autumn, October and our most talked about September exhibitions. 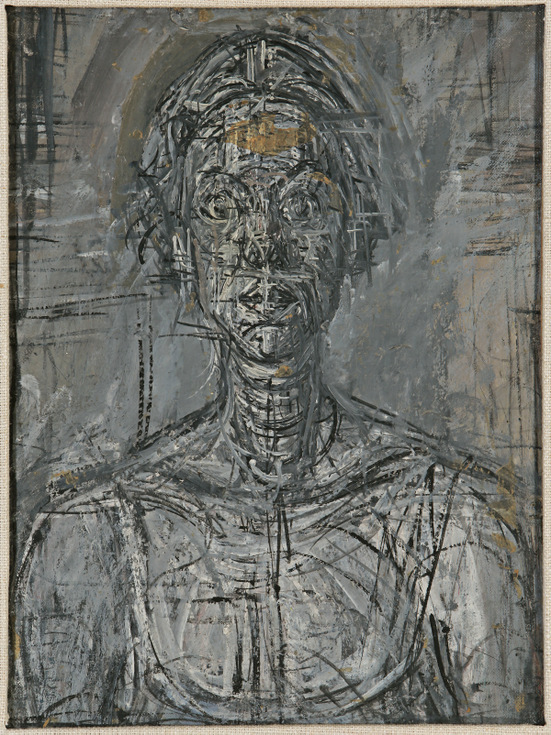 These ‘scracthy’ grey portraits are the most striking works on display. Copyright: The Estate of Alberto Giacometti (Fondation Giacometti, Paris and ADAGP, Paris) 2015