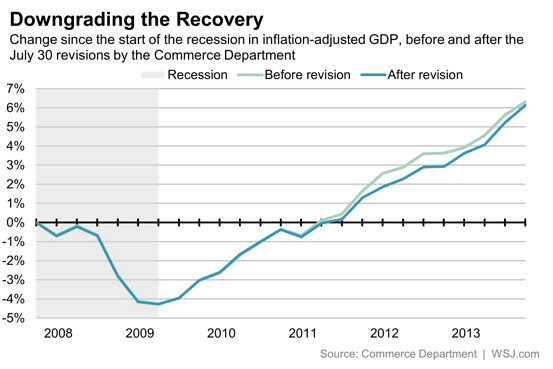 The U.S. economy expanded at a stronger pace in the second half of 2013 than previously measured, growing at the fastest rate since 2003, according to revised data released by the Commerce Department on Wednesday.

But the figures also show that the economy grew at a slower pace than previously estimated during the three-year period that ended last year, expanding at an average annual rate of 2%, down from an earlier published estimate of 2.2%.

Each July, the Commerce Department makes annual revisions to gross domestic product, the broadest measure of goods and services produced across the economy. The data, released along with the first reading of second-quarter GDP, incorporates newly available sources of data on trade and incomes to provide a more accurate picture of the economy.

Estimates for 2013 were revised up to 2.2% from an earlier estimate of 1.9%, with a particularly strong boost in the second half of the year. The economy grew at a 4.5% annual rate in the third quarter and a 3.5% rate in the fourth quarter, up from initial readings of 4.1% and 2.6%, respectively.

Estimates of gross domestic income were revised up for 2012. National income was better than expected due to an increase in income for non-corporate businesses such as sole proprietors and partners. Compensation income, which accounts for the majority of income, was revised down slightly.

The current recovery, which began in the second quarter of 2009, was already the weakest recovery since World War II. Wednesday’s revisions show that through the end of last year, the economy has grown at an average annual rate of 2.3% since that recovery began, down from previous estimates of 2.4% annual average growth. 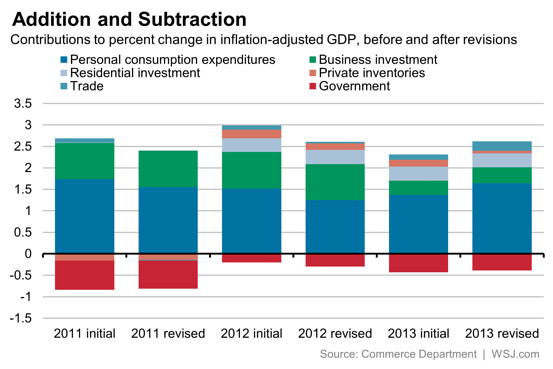