Robots May Look Like Job-Killers, But It’s Hard to See in the Numbers – Real Time Economics 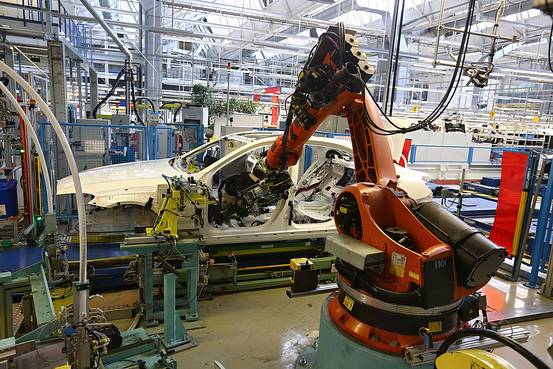 Some countries that have adopted robots much faster than the U.S.—including Germany, home to this automotive plant—saw far smaller losses in jobs between 1996 and 2013.
THOMAS NIEDERMUELLER/GETTY IMAGES

Robots are goosing the productivity of the world’s factories, but does that mean fewer jobs for humans?

Countries are adopting them at different speeds, with some of the fastest growth in Asia—particularly China. If robots are the automated job-killers many say they are, then you’d expect nations deploying the most machines to see the biggest job losses in manufacturing. But it isn’t that simple.

There’s no relationship visible in the numbers between the change in factory employment and robot use, says Mark Muro, senior fellow at the Brookings Institution. In a blog post, he and Brookings colleague Scott Andes took a recent report by two European economists that found robots enhanced productivity in 17 countries in recent decades and checked to see how job losses stacked up among some of the biggest robot users.

They found some countries that have adopted robots much faster than the U.S.—including Germany and South Korea—saw far smaller losses in jobs between 1996 and 2013. Meanwhile, both Britain and Australia have lagged the U.S. on robots, yet suffered deeper job losses. They then asked the question a different way: How many jobs would each country expect to lose if the drop in factory employment was proportional to the rise in robots? Again, there’s no clear linkage. “By this metric the United States should have lost one-third more manufacturing jobs than it actually did and Germany should have lost 50 percent more, while the United Kingdom lost five times more than it should have,” they wrote. “None of this means that robotics don’t vaporize jobs,” Mr. Muro says. There just isn’t evidence in the data that more robots equate to more job losses. Many other factors, including shifting labor costs and currency, influence the health of a nation’s manufacturing sector. Still, many experts worry that automation and robotics is at a tipping point and will soon start eliminating jobs faster and in a broader swath of the economy.  Others insist all this fretting is misplaced. Automation will free workers to do other kinds of tasks, they say, and fuel more prosperity.

“We’re just making the point that the debate (over jobs) has gotten way out in front of the data,” Mr. Muro says.

Robots Can Mix You a Drink. But Will They Listen to Your Problems?