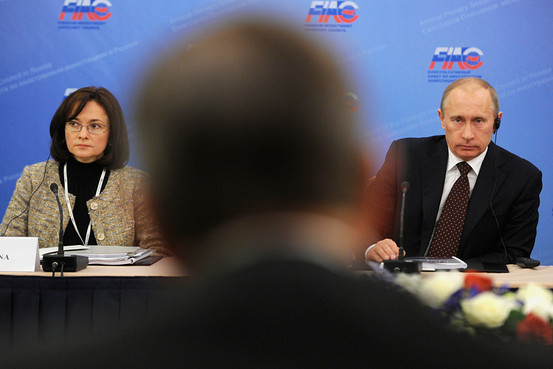 Russia’s economy is likely already in recession with the ruble tumbling to new lows. But the country’s pain is just starting, says one of the world’s largest banking groups.

“There is complete panic in the financial markets” in Russia, said Lubomir Mitov, chief Europe economist at the Institute of International Finance, a banking industry group in Washington that represents more than 500 of the world’s largest private financial firms.

“The central bank has hours or days probably to get this under control because if the population runs to the banks to get their deposits, then it’s game over,” Mr. Mitov said in an interview.

Russia’s economy is verging on collapse for two major reasons: oil and sanctions.

As one of the world’s largest oil producers, the country relies largely on crude exports to fund its government and fuel its economy. Oil prices have plummeted in recent months, losing nearly half their value. That drop came as overall investment in Russia was already falling and economic growth was slowing down.

It also followed Western sanctions against Moscow’s involvement in Ukraine’s war with Russia-backed separatists. Those sanctions sparked a massive capital outflow as investors—both foreign and domestic—pulled their cash out of the country in droves. Since Russia’s economy is in large part fueled by investment from abroad, that capital exodus combined with the oil-price plunge pushed Russia’s economy into recession.

Fear about the economy’s darkening outlook drove investors to also sell rubles, pushing the value of the Russian currency down to new lows against the dollar.

Russia’s central bank hiked rates to 17% overnight Monday, up from 10.5%, in a scramble to retain investment, tamp down inflation and stem the currency’s tumble. That just spooked markets further; the battered currency plunged another 20% against the dollar Tuesday.

The IIF believes that oil at $60 a barrel could mean a 5% contraction in the country’s gross domestic product next year, following its struggles already this year.

Now, anyone with dollars or other foreign currency in Russia won’t sell, Mr. Mitov said.

So far, the panic has been confined largely to financial markets. But it could widen if households rush to pull their cash from banks.

A bank run “is only a matter of time,” Mr. Mitov said. “There are reports that there is no hard currency, cash, to be bought in either Moscow or St. Petersburg.”

Some economists have pointed to central bank reserves that could be used to defend the ruble’s fall and stabilize a sell-off. While Russia’s crisis buffer looks good on paper at over $400 billion, some say the actual amount available to help tame the current crisis is much smaller.

Anders Åslund, a Russia expert and senior fellow at the Peterson Institute for International Economics, estimates it could be less than half that amount. That’s largely because two funds Russia includes in that amount—the National Wealth Fund and the Reserve Fund–aren’t technically usable by the central bank. Also, the country’s gold and reserves held at the International Monetary Fund aren’t fungible assets that can be quickly tapped by the central bank.

That much smaller actual reserve pool could limit Moscow’s currency intervention to defend the ruble to about half a year, Mr. Mitov said.

And because Russian companies owe much larger amounts to foreign creditors, reserves are dangerously low. “It looks like a house of cards and Russians know such dangers all too well,” Mr. Åslund said in a recent blog post, referring to the country’s last major economic crisis.

The value of corporate debts balloon as the ruble depreciates against the dollar, and company prospects have since darkened as demand collapses for oil and other products Russians buy.

“There will be a widespread wave of corporate defaults later next year,” Mr. Mitov said. Companies in the telecom and retail sectors, which receive a major share of their income through local currencies, are likely to be most at risk, he said.

So what can Moscow do to prevent an economic collapse?

The Kremlin can do little about oil prices. But it can implement capital controls to minimize cash outflows and fund a strategy to defend the ruble’s value.

Although the central bank has said it’s against capital controls, the Duma has a draft proposal that Mr. Mitov said could be one of the country’s best policy tools to halt the ruble’s decline. The government could require firms to hand over a certain amount of their foreign currency, with guarantees by the central bank not to return the cash at a depreciated rate.

And President Vladimir Putin could change the Kremlin’s Ukraine strategy to relieve sanctions pressure. If the Kremlin were to agree to stop backing separatists in Ukraine, help negotiate a peace agreement that includes a workable governance deal for the Eastern regions and agree on a financing package for Ukraine, the West might be willing to lift their sanctions against Russia. (Ukraine’s economy is also on the verge of collapse.)

If the sanctions were lifted, “there would be a huge inflow of capital into Russia because markets are very clearly undervalued right now,” Mr. Mitov said.

Russian officials remain far from a consensus for that kind of about-face on a major geopolitical strategy.