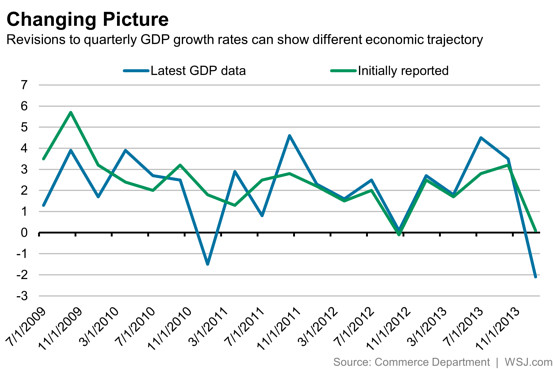 A sharp rebound in economic output this spring has revived hopes the nation’s five-year-old recovery could be poised to move into a higher gear.

Gross domestic product rose at a seasonally adjusted annual rate of 4.0% in the second quarter, according to an advanced estimate from the Commerce Department Wednesday. That was well above the 3% pace forecast by economists surveyed by The Wall Street Journal and more than reversed a 2.1% decline in the first quarter.

But the Commerce Department’s Bureau of Economic Analysis will revise its advance GDP estimate multiple times to reflect new data as it becomes available. The revisions can change the outlook for the U.S. economy, as happened last month when a decline in first-quarter GDP was revised down to its fastest rate of decline since the end of the recession.

When the Commerce Department publishes its advance estimate nearly one month after the end of each quarter, it doesn’t have data for the full three-month period. For segments of the economy like health care, exports and housing investment the agency is forced to make assumptions largely based on historical trends.

The agency also does annual GDP revisions, usually during the summer and usually for the past three years’ worth of data. It published the results of the latest annual revision Wednesday, along with the advance second-quarter GDP data. The revision showed that output expanded at a stronger pace in the second half of 2013 but showed a weaker overall recovery.

Finally, the Commerce Department does an even more comprehensive revision of its GDP data every five years.

Over time, the successive revisions generally move estimates of output slightly higher. Between 1983 and 2010, the latest estimate of quarterly changes in GDP was 0.3 percentage point higher on average than the initial estimate, the Commerce Department said.

But on occasion, revisions can send GDP estimates sharply downward. In response to the first-quarter rollout of the Affordable Care Act, the Commerce Department altered its methodology for calculating health-care expenditures in its advanced GDP estimate. When more complete data became available, the agency slashed its estimates for spending on health care and overall economic output.

One Big Factor in the Economic Uptick: Government Spending

Hilsenrath: Modest Growth Beneath the Surface Keeps Fed on Track