Serena Williams said she’s “heartbroken” to leave Wimbledon and blamed a “bug” for the strange symptoms that caused her to forfeit her doubles match Tuesday.

The 32-year-old tennis star, who won the U.S. Open last fall, was forced to forfeit the match after struggling to bounce, catch and serve the ball.

Wimbledon tweeted that Williams was “suffering from a viral illness” as she left the court hand-in-hand with her sister, Venus.

“I thought I could rally this morning, because I really wanted to compete, but this bug just got the best of me,” Williams said in a statement. 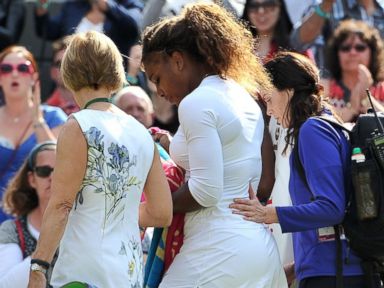 PHOTO: Serena Williams and her sister Venus Williams leave the court after retiring from their women’s doubles match after Serena was taken ill during the 2014 Wimbledon Championships in Wimbledon, southwest London, on July 1, 2014.

Venus Williams: What Is Sjogren’s Syndrome?

Kikano said Williams appeared to be confused, which could be a sign of dehydration caused by a virus, bacteria or the environment. She could also have been experiencing side effects from some kind of medication or she might have just been exhausted.

Dr. William Schaffner, chairman of preventive medicine at Vanderbilt University Medical Center in Nashville, Tennessee, said Williams didn’t appear to be suffering from a neurological virus because she was still able to walk on her own. He echoed Kikano’s theory that dehydration could have been to blame.

“That could be a consequence of any number of viral illnesses,” he said. “It’s still too vague to comment on unless they give us more details.”

Williams had another health scare in 2011 when she suffered a blood clot in her lungs following a foot injury and surgery.