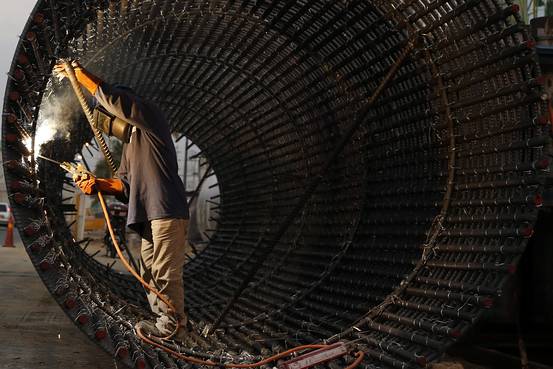 Economists have cheered infrastructure spending in the Philippines as a means to boost growth. Here, a Filipino worker welds metal at a road construction site south of Manila.
European Pressphoto Agency

Many central banks in Asia have cut interest rates this year to boost growth. Now, governments need to play their part and start spending, some experts say.

It’s “time to turn on the tap for fiscal spending,” says HSBC economist Frederic Neumann. “Monetary policy is losing its punch,” he says, adding that low interest rates make it an opportune time to get long-term financing for infrastructure projects.

In its capital-spending outlook, consulting firm PwC said that some emerging-market governments have room to spend, as debt burdens have stabilized in recent years. The caveat is they have to do so wisely.

Indonesia, Thailand and India are moving in that direction, but more needs to be done, says Mr. Neumann. South Korea, while more advanced, could spend more, too—though on welfare more so than on infrastructure, he says. Last week, finance minister Choi Kyung-hwan said the government would ramp up stimulus in the second half of the year if required.

But some governments seem reluctant to do so. Memories are fresh of the Asian financial crisis, when high levels of debt denominated in foreign currencies hobbled economies as regional currencies plunged.

In the past two decades, careful financial management and export booms helped repair Asia’s balance sheets. Many policy makers don’t want to undo that good work. In Indonesia, for instance, public debt-to-gross domestic product ratio went from nearly 90% in 2000 to 25% in 2014, according to the International Monetary Fund. 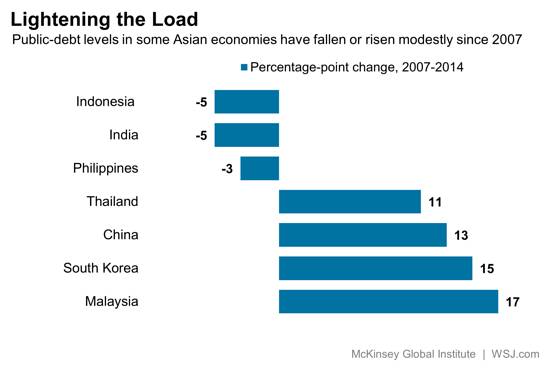 That’s why some economists say growth in emerging Asia is better left to central banks.

“Many of these countries have room to maneuver in monetary policy,” says Daniel Martin, a Singapore-based analyst at research firm Capital Economics. “On the fiscal side, there are just too many risks involved.”

Emerging-market governments tend to have higher borrowing costs than those in advanced countries because of weaker credit histories and less political stability. During times of crisis, it can become difficult to tap global capital markets.

In Indonesia, where foreigners hold nearly 40% of rupiah-denominated bonds, the government is acutely sensitive to how investors perceive its fiscal health–particularly as the U.S. weighs raising interest rates later this year.

For years, Indonesia’s surging exports and China’s appetite for its coal, palm oil, gas and rubber led to robust trade surpluses. That reversed recently amid a drop in demand and commodities prices.

The IMF earlier this month said emerging-market economies rarely use the good times to build up their fiscal war chests, leaving policy makers underprepared when a downturn hits. The PwC report makes a similar point.

During its boom times, Indonesia underinvested in areas like healthcare and education, says Su Sian Lim, a Singapore-based economist at HSBC. Meanwhile, the government spent more than $130 billion on fuel subsidies over the past five years, which do little to create growth.

Now, President Joko Widodo’s government wants to spend $400 billion on much-needed toll roads, dams and power plants. But those plans are constrained by a budget deficit nearing its maximum of 3%.

Late last year, Mr. Widodo’s government slashed its fuel subsidy—an unpopular move, though one applauded by economists. Indonesia’s policy makers have “a lot of firepower if they choose to use it wisely,” says Ms. Lim. That also applies to India, Malaysia and Thailand, where governments similarly have made strides to prune subsidies.

In China, measures to ramp up government spending could threaten a much-needed shift from investment-driven to consumer-driven growth. Last month, Beijing raised its fiscal-deficit target to 2.7% of GDP from 2.3% for 2015. Officials are campaigning for local governments to spend more amid slowing growth: The economy expanded 7% in the first quarter from a year earlier, its slowest pace in six years.

But those local governments aren’t rushing to borrow for new projects because debt levels are rising and lending rules are tightening. What’s more, President Xi Jinping’s anticorruption drive has made local officials wary of cozying up to private business for risk of stoking suspicion—or, worse, allegations of wrongdoing.

Given China’s yearslong reliance on investment as a driver of its economy, some say it will be difficult nonetheless to squeeze much more growth from increased spending.