Should the U.S. and Germany Tie On Purpose? A Game Theory Perspective – Real Time Economics

If the U.S. and Germany collude and tie their World Cup match today, then both teams will safely advance. Such an outcome is far from honorable, but it’s also not unprecedented at the World Cup. Snickering Americans may note that in their great sports tournaments, like the NFL playoffs or the NCAA’s March Madness, teams never have an incentive to just break even. 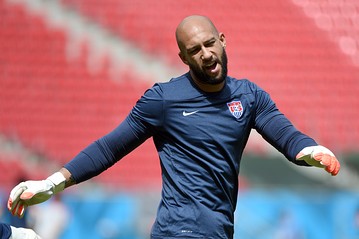 U.S. goalkeeper Tim Howard warms up during a training session in the Pernambuco Arena in Recife on June 25, 2014 on the eve of the Group G football match between USA and Germany in the 2014 FIFA World Cup.
Agence France-Presse/Getty Images

If you’re familiar with game theory, however, you may recognize that the quandary U.S. and Germany face in the World Cup resembles a classic Prisoner’s Dilemma, right out of the economics textbooks on game theory. In the Prisoner’s Dilemma, two suspects are being questioned by the police. If both keep their mouths shut, the police have no evidence, and both get short prison sentences for obstruction of justice. If one of them rats, however, he goes free and his accomplice gets all the prison time. If they both rat, they both serve lengthy sentences.

The point of the dilemma is they’d be collectively better off keeping their mouths shut and serving brief terms.

But if you’re confident the other guy will keep his mouth shut, why not rat so you can go free and he can rot in prison? And if you think he’s going to spill the beans and go free: Don’t let him get away with it! Tell the police it was all him! So individually each prisoner has a big incentive to rat.

If you’ve encountered this in economics class, you may recognize the U.S. and Germany are in the same situation as the prisoner’s dilemma. Although both teams safely advance with a tie, neither truly has the right incentives for this outcome. 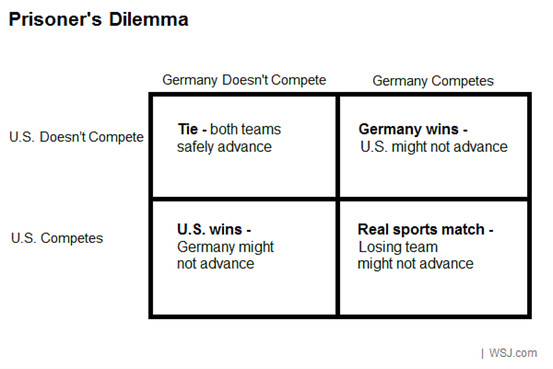 A tie is the only scenario in which both teams advance, though dishonorably. This is analogous to having two prisoners agree to keep their lips sealed. So why not have everyone just lie on the ground for 90 minutes, pretending to be injured?

But, again, the point of the prisoner’s dilemma is that this outcome is not likely. Although the teams collectively have this incentive, they don’t individually have the incentive. Each team has an incentive to take advantage of the other team’s sloth and go for a surprise goal. Yes, the other team would then know to start fighting back, but by then it may be too late.

Here’s why both teams need to compete. If the U.S. thinks Germany might go for the surprise goal, then Germany would advance and the U.S. risks elimination. So the U.S. should play hard and go for the win.

And if Germany wasn’t going to compete but the U.S. plays hard anyway, then the U.S. easily and honorably advances . No matter what Germany does, it’s a good strategy for the U.S. to play and win. (Even ignoring issues of “who wins the group.”) The same set of logic applies for Germany.

So while it might look like the teams have an opportunity to collude, the prediction of game theory is that these teams shouldn’t trust each other and have an incentive to actually play the game. So figure out how to skip out of your office and watch the game.