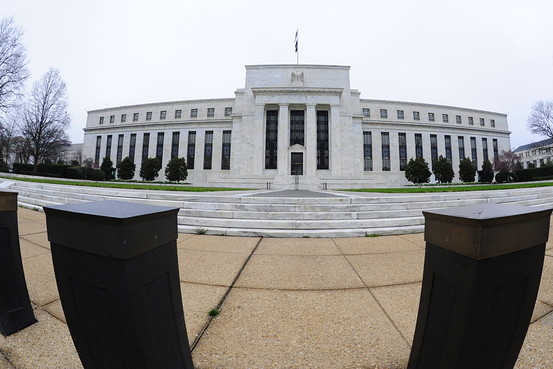 With hindsight, we know that the economy reached a turning point in mid-2009: It stopped shrinking and began growing again. But the expansion would be slow and disappointing and would leave millions unemployed for years.

As Federal Reserve policy makers battled the financial and economic crisis in 2009, it was far from obvious when the downturn would end. Details of their internal discussions that year were revealed Wednesday when the central bank released transcripts of the meetings its policy meetings after their customary five-year lag.

Here’s a look at the data, in six charts, that illustrate the economic conditions the policy-making Federal Open Market Committee confronted in 2009. All the charts end in December 2009. 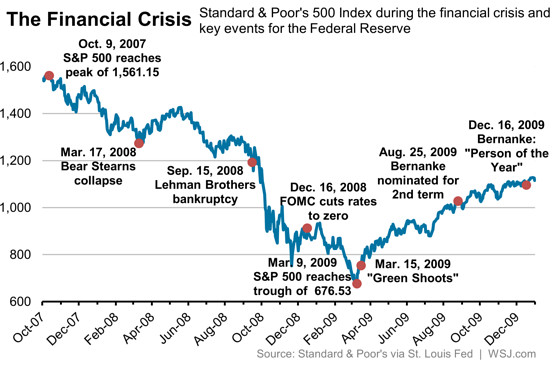 By the start of 2009 it was clear that the stock market was in the midst of a full-fledged panic.

Despite the Fed’s historic decision to cut its benchmark short-term interest rate, the federal funds rate, to nearly zero in December 2008, stocks continued to plunge at the beginning of 2009. By early March, the Standard & Poor’s 500 index had lost more than half its value since late 2007. In mid-March, the mood of the market had changed, and Fed officials were quick to seize on the momentum. On March 15, 2009, then-Fed Chairman Ben Bernanke went on CBS’s “60 Minutes” and declared that he was beginning to see signs of “green shoots” in the economy.

“As those green shoots begin to appear in different markets– and as some confidence begins to come back– that will begin the positive dynamic that brings our economy back,” Mr. Bernanke said. It turned out that the market had reached a bottom six days earlier. On March 18, 2009, the FOMC sought to ensure those lows would never again be tested. That day, the Fed announced it would expand its bond-buying program, known to many as quantitative easing, to include a total of $1.75 trillion in mortgage bond and Treasury debt purchases. 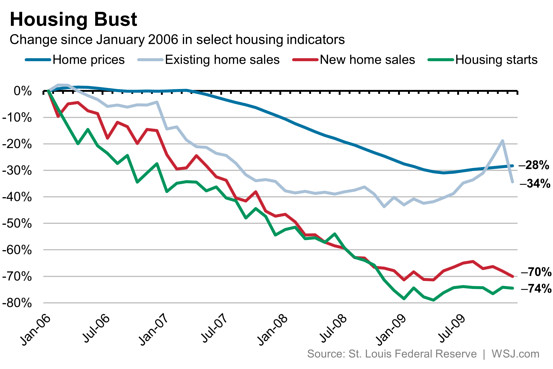 By 2009 it was also clear that the U.S. was in the midst of an unprecedented housing crisis. The gains in sales, construction and prices of homes in the mid-2000s were clearly unsustainable. The U.S. housing bubble had burst and sales, prices and home construction (a key driver of economic activity) were all in free-fall.

The rapid plunge of 2008 slowed in 2009, but it was clear housing was in for a very long road to recovery. By the end of 2009, home prices were 28% lower than in January 2006, existing home sales were 34% lower, new home sales were 70% lower, and new housing construction starts were off by 74%. The housing figures above have been revised since 2009, but only modestly. It was clear in real time that housing was in complete collapse. 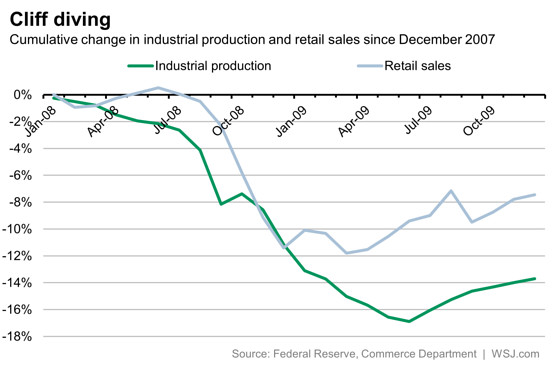 The National Bureau of Economic Research, which serves as the semi-official arbiter of U.S. business cycles, declared in December 2008 that the recession had begun a year earlier. The NBER takes its time calling turning points in the economy, waiting until the turn is clear in the data. It wasn’t until September of 2010 that the NBER felt comfortable declaring the recession had ended in June of 2009.

The NBER looks at GDP and jobs, but also industrial production and retail sales, when it determines economic turning points. A look at this data through 2009 shows how unclear the recovery was. Retail sales and industrial production both showed some signs of improvement, but had clearly taken a big hit over the course of the recession. It’s no wonder that Warren Buffett famously said in March 2009 that the economy had “fallen off a cliff.”

These data, too, have been revised since 2009. The turning point for industrial production was clear in the initial reports. It’s hard to say today, even with the benefit of revisions, when retail sales decisively turned upward. It was even less clear in 2009. 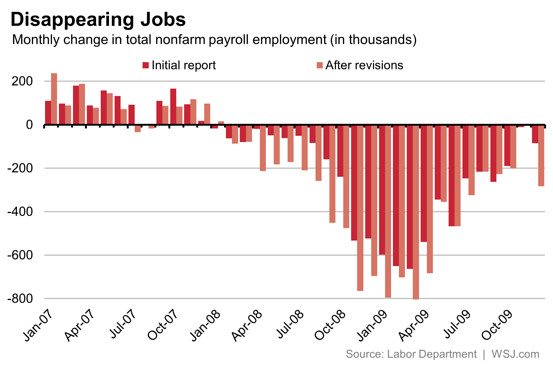 By early 2009, the economy was hemorrhaging more than half a million jobs every single month. The period would ultimately be the most severe period of job loss since the Great Depression.

The economy looked horrible at the time, but later revisions would reveal that it was even worse than it appeared. For January 2009, for example, the Labor Department initially reported job losses of 598,000. A terrifying figure. That number was eventually revised to job loss of 796,000. Even worse. As part of the department’s standard process, initial reports are subsequently revised as some establishments report their tallies late. The numbers are eventually reconciled with tax records and other surveys to ensure their accuracy. 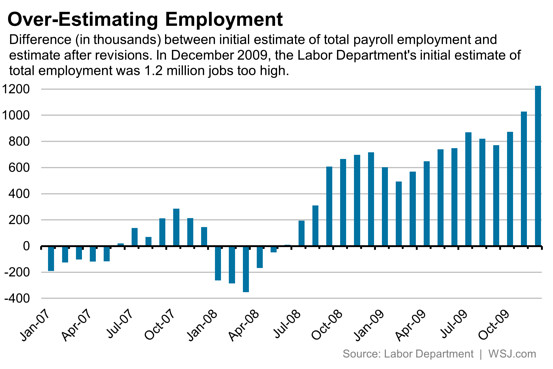 Over the course of the recession, the errors in the data got worse and worse. It was not until January 2010 that revisions revealed how badly the Labor Department had been overestimating the total number of jobs in the economy. Economists at the Fed and elsewhere did not realize how far off the estimates had been.

For December 2009, the Labor Department initially estimated the economy had 130.9 million jobs. That was eventually recognized as an overestimate of 1.2 million. The figure was later revised to 129.7 million. The initial payrolls figures are never exactly right, but they are especially prone to misses during economic turning points. 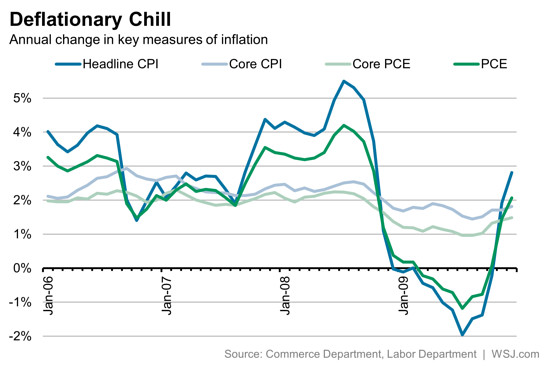 The consumer price index and the Fed’s preferred gauge–the personal consumption expenditures price index–both plunged into negative territory by 2009. Making matters worse, high unemployment and lower commodities prices were putting downward pressure on measures of so-called core inflation that exclude food and energy prices. The risk of a deflationary spiral looked all too real in 2009.

The CPI does not undergo revisions – so these lines show precisely what Fed officials were seeing in real time. The PCE price index has modest revisions after the initial report.

It was not until the very end of the year that measures of headline inflation began to pick up. In hindsight, we know that Fed policy makers would spend much of the next five years struggling with inflation that was too low, not too high. But by the end of 2009, with price measures recovering, it may have appeared the economy had escaped the grip of deflation once and for all.

Five Takeaways from the 2009 Fed Transcripts

A Timeline of the Federal Reserve in 2009

Who’s Who at the Federal Reserve in 2009