While the oxygen bar trend has been around for some time, designer Adam Miklosi’s Chlorella Pavilion could be the first to lean on algae as a source of oxygen. The pavilion resembles a round hand-woven basket, and its walls contain living algae which are pumped through the core in a swirling “algae fountain” that consumes carbon dioxide while emitting pure oxygen as a byproduct. The funky, futuristic clean air pods hold several chairs where visitors can breathe in some of the cleanest air on Earth. The design, still in its conceptual phase, could inspire future businesses to tap into the air-cleaning power of algae to produce pure oxygen, which is touted as a treatment to flush toxins from the body and alleviate symptoms like headaches, weak immune systems and even sinus issues. 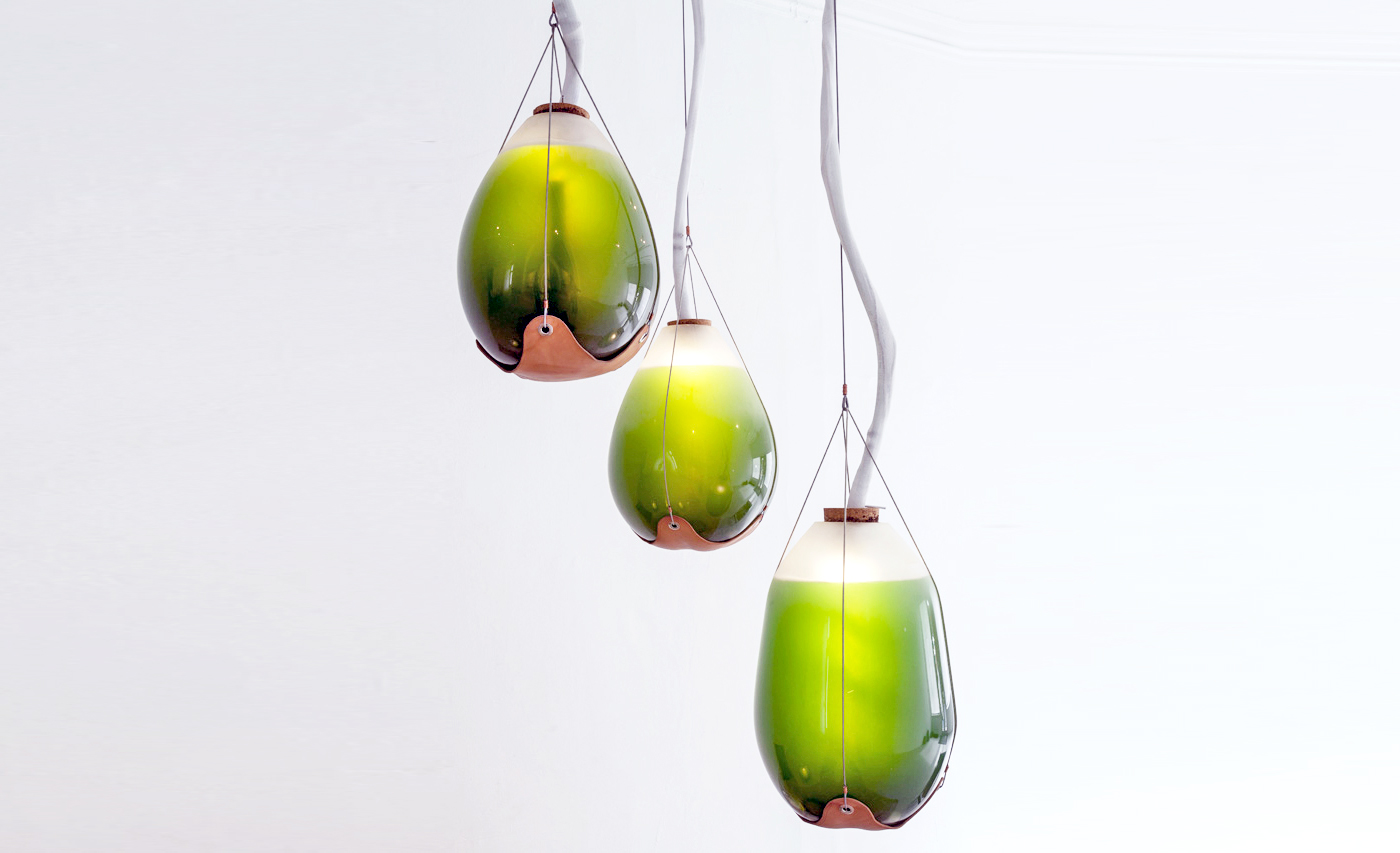 This line of photosynthetic furniture and fixtures uses microalgae (effectively a “liquid plant”) to bring bright green accents to modern spaces, while simultaneously providing light and much-needed nutrients. Architectural designer Jacob Douenias and industrial designer Ethan Frier partnered to create Living Things, a spirulina-based line of lamps and algae-integrated tables that improve their environment and enable a healthier lifestyle for their human owners. The living algae housed within the luminous green liquid-filled lamps recycle light, heat and carbon dioxide, reducing energy needs and cleaning the surrounding air — like ultra-efficient houseplants for the next generation. 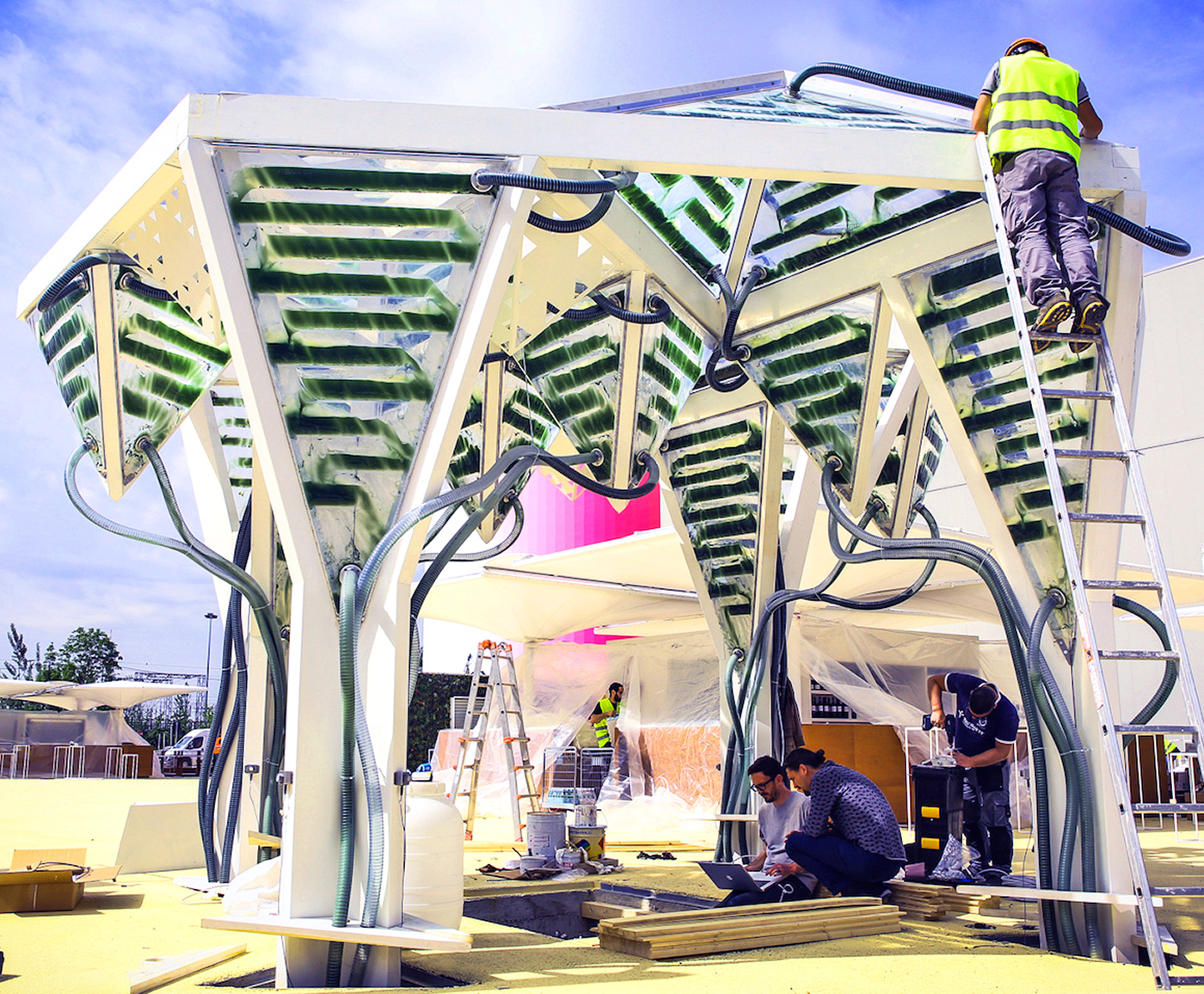 EcoLogicStudio’s Urban Algae Folly is an elevated, angular building that grows spirulina (a form of microalgae) in tubes. The sun-loving algae grows denser as it thrives, creating a shaded canopy for passersby. The tiny plants can be harvested and converted into biomass for fuel, or consumed by humans as nutritious food. Microalgae-based structures like Urban Algae Folly can reportedly clean ten times as much carbon dioxide from the surrounding air than large trees, making this concept a perfect fit for polluted urban centers around the world. 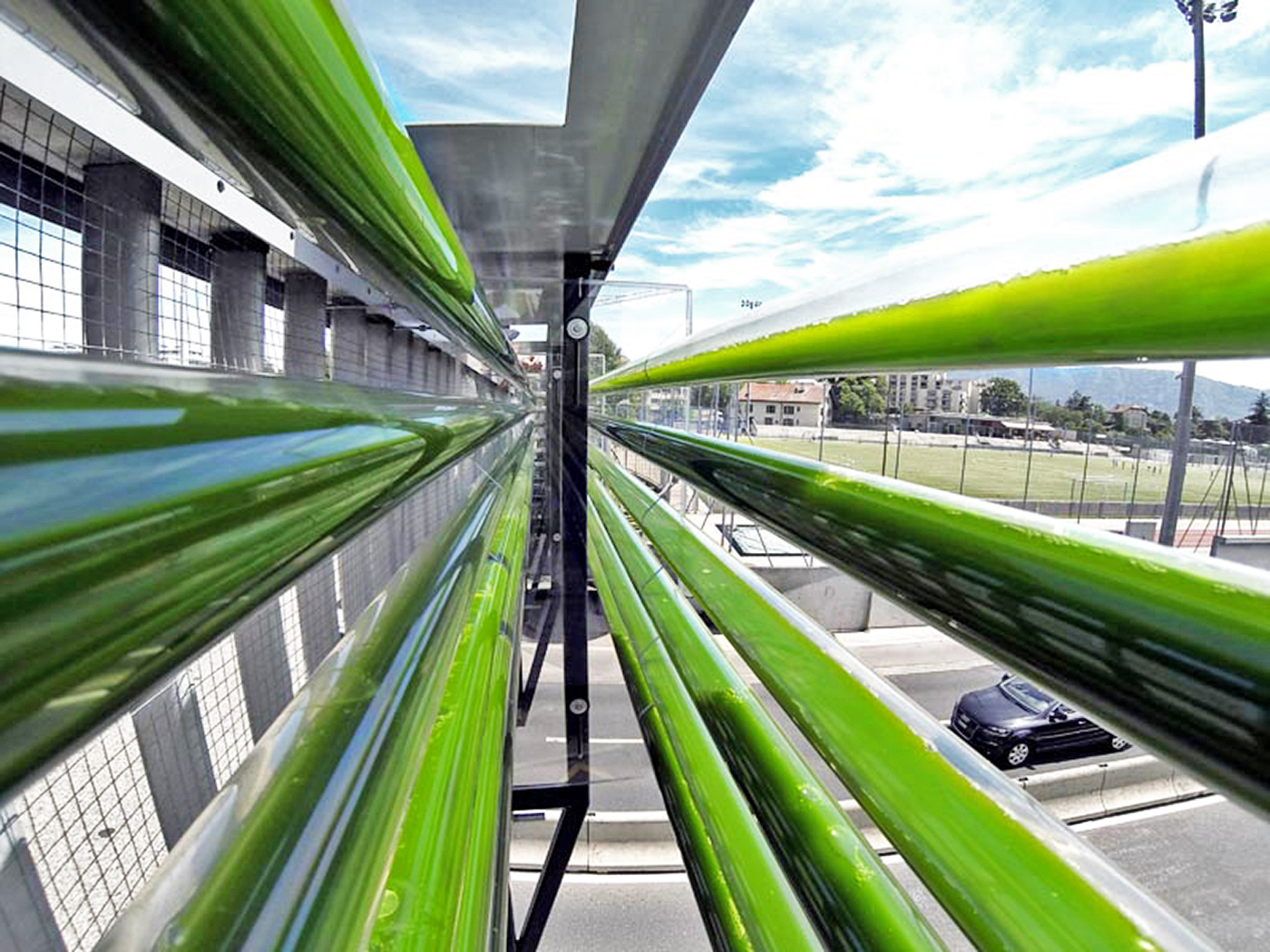 Perhaps nowhere on Earth is the concentration of carbon dioxide emissions greater than on major roadways, where vehicle traffic coughs out tons of greenhouse gases each year. In Switzerland, the French and Dutch-based Cloud Collective created an urban algae farm on a busy highway in an effort to combat those very emissions and generate a little renewable energy at the same time. The system is comprised of a network of translucent pipes affixed to the side of a regular overpass, through which microalgae flow, feeding on the carbon dioxide emissions from the passing cars below. Because algae consumes carbon dioxide and emits pure oxygen, this sort of urban farm is highly effectively for cleaning the air in the most polluted of places. 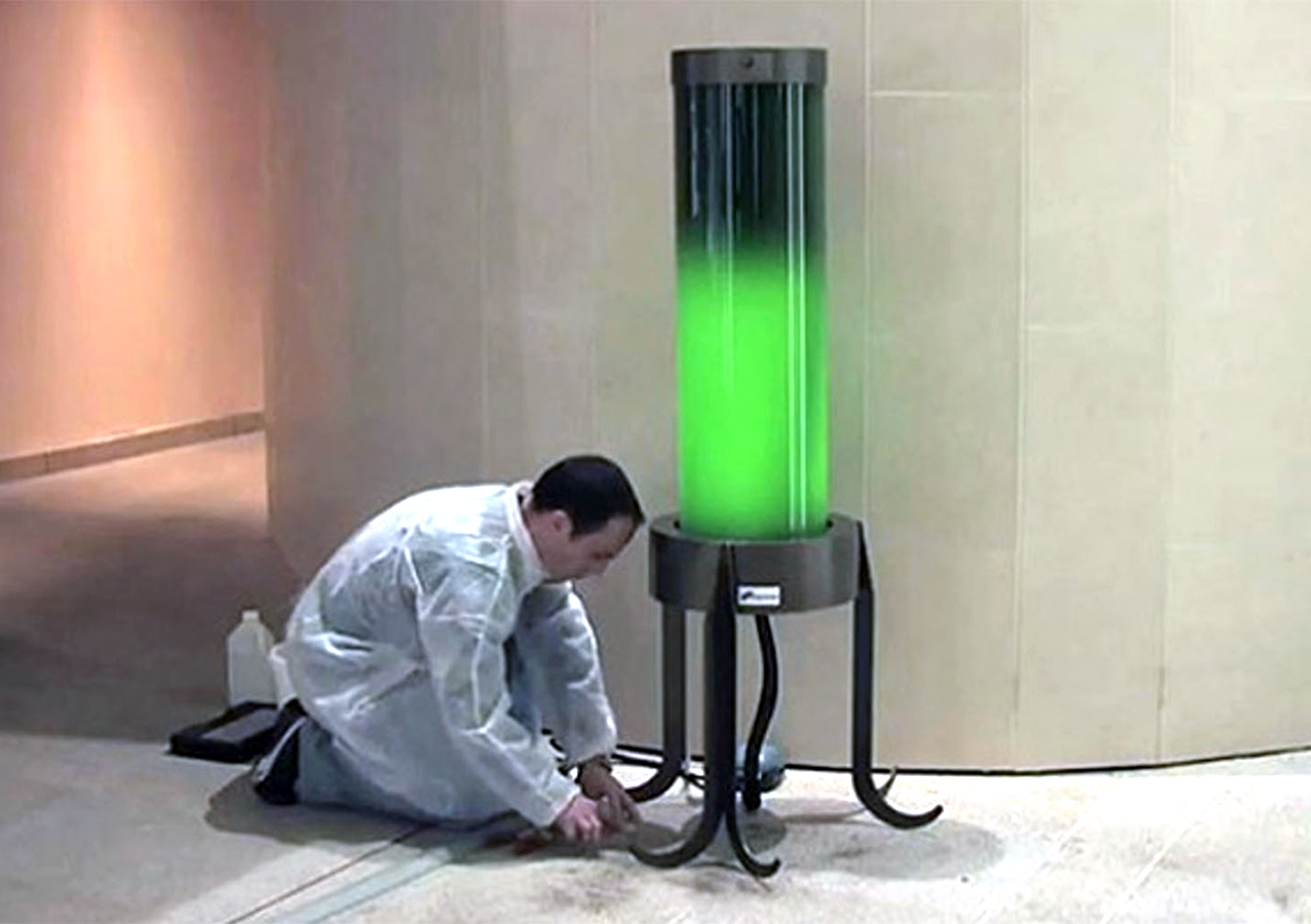 Many of the algae-based lamps we’ve seen are designed as art pieces, or for homeowners with futuristic taste and deep pockets. This large-scale algae lamp created by French biochemist Pierre Calleja in 2013 was intended for industrial applications. Calleja designed the lamp to illuminate low-light urban locales, such as parking garages and city streets. According to its inventor, a single algae lamp could consume roughly a ton of carbon from the air each year — the equivalent of 200 trees. By installing air-cleaning lamps in dark urban spaces, cities could fight climate change while creating safer places for residents who just need a little help to light their way. 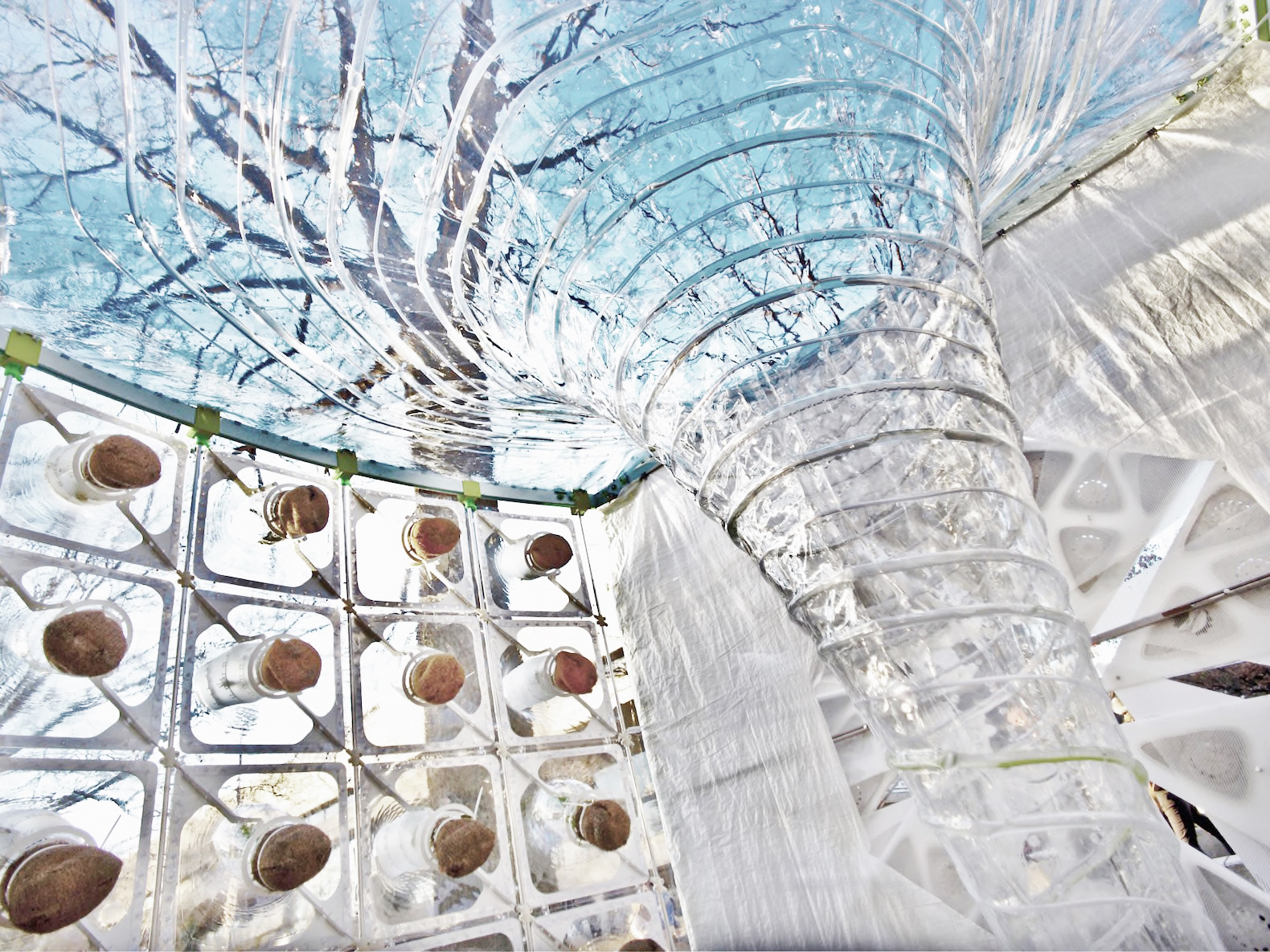 Perhaps one of the most outlandish algae-based designs in history, the Algaevator is a functional piece of artwork, if not of architecture. This spiral-shaped pavilion was created by designers Jie Zhang and Tyler Stevermer to harness the biofuel potential of tiny green microalgae. Housed within a cubic frame, the Algaevator features a central funnel-like structure which holds a spiraling garden of algae. A low-energy pump pushes carbon dioxide from the atmosphere to the bottom of the coil, where it is consumed by the microalgae. As the algae grows, it emits pure oxygen and creeps slowly toward the top of the structure. In total, the Algaevator is an air-cleaning machine that doubles as a living work of art, carefully crafted to highlight the brilliant green hue of hard-working microalgae.