Six Years Down the Road, What Should the Federal Minimum Wage Be? – Real Time Economics 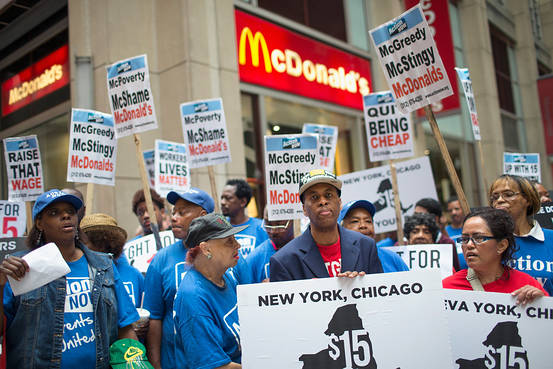 Fast food workers and community activists protest outside a McDonald’s restaurant in Chicago in June. The protesters were advocating for a $15 an hour minimum wage.
Getty Images

The political and economic landscape has changed dramatically since the federal minimum wage was last increased six years ago, on July 24, 2009, to $7.25 an hour. The economy has emerged from a deep recession with steady hiring, but halting wage growth. And efforts to raise the minimum wage have gained traction with many city councils and state legislatures–but not with Congress, despite repeated calls from President Barack Obama to lift the wage floor.

So six years after the last raise for some minimum-wage workers, what should the pay floor be?

Republican leaders in Congress and many business groups see little reason to lift the wage from where it stands now. They point to studies, including one from the Congressional Budget Office, that say raising the minimum wage would cost the country hundreds of thousands of jobs.

The majority of U.S. states, 29 plus the District of Columbia, have set a minimum wage above the federal level. Rhode Island raised its wage this year, setting it at $9.60 an hour beginning next year and 14 states raised the rate last year. The average minimum wage mandated among states this year is $7.92 an hour. That will increase to well more than $8 an hour by 2018 when states such as Vermont, Massachusetts and Washington require all workers earn at least $10 an hour. 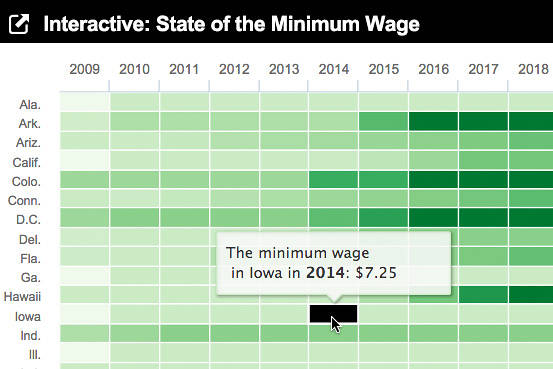 Had Congress mandated the minimum wage to keep up with inflation since 2009, the current rate would be $8.03 an hour. While a 78-cent raise would likely be welcomed by minimum-wage earners, the inflation-adjusted level is far less than the sums, some as high as $15 an hour, that many proponents of an increase are now proposing. The reason? Overall inflation has been fairly soft during the economic expansion. 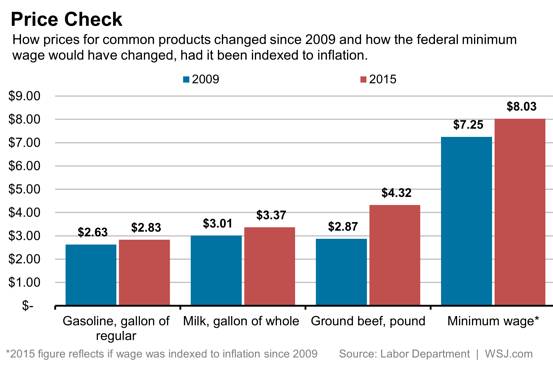 President Obama has endorsed a $10.10 an hour level, raising it from an earlier $9 an hour goal. For a time that seemed to be the target. Last year Maryland, Connecticut and his native Hawaii put their wage scales on a path to meet that mark. But since, a few states and cities have set wage floors much higher.

The “Fight for 15” has been the rallying cry of fast-food workers and other proponents of minimum-wage increases. And their calls have been heeded in several large cities. Workers in Los Angeles, Seattle and San Francisco will all be paid at least $15 an hour by the early part of next decade. Now lawmakers in Oregon and California are contemplating setting the statewide level as high as $15 an hour. 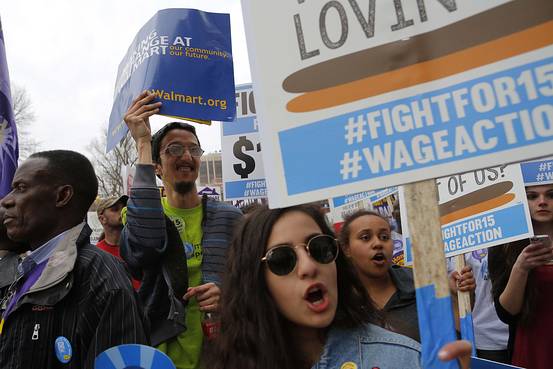 Wal-Mart employee David Coulombe participates in a rally seeking a $15 an hour minimum wage in Boston as part of nationwide Fight for $15 events.
Bryan Snyder/Reuters

Depends on your job

An emerging trend is minimum wages set by industry or type of worker. New York state officials this week mandated that fast-food workers eventually earn $15 an hour. On the same day, the University of California system mandated all workers on their campuses earn the $15 mark. Last year, Los Angeles officials set a $15.37 an hour wage for workers at large hotels.

Depends on where you live

Some economists and politicians, including the Los Angeles mayor, say there shouldn’t be a single minimum wage for the entire country. Instead cities and states should set wage laws based on their local economies and cost of living. Earlier this month Kansas City, Mo., set a $13 an hour minimum wage. “Other cities have taken a more aggressive approach, but we see ourselves as leaders in the Midwest,” said Kansas City Councilman Jermaine Reed. Portland, Maine, recently set a $10.10 wage for its city, matching the level of Louisville, Ky. And Washington could become East Coast city with a $15 wage floor, if voters there approve a ballot measure next year. But elsewhere, $7.25 hardly seems out of touch. Half of all workers in Mississippi earned less than $13.76 an hour last year, according to the Labor Department. 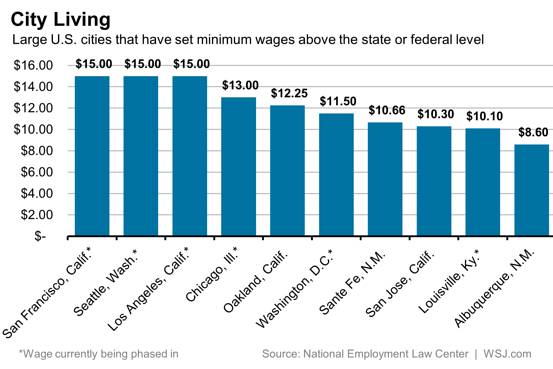 Obama’s Plan to Raise Minimum Wage Is Stalled in Congress