Wal-Mart Stores Inc., the world’s largest retailer, last year announced it would spend $250 billion more over the next decade on U.S.-made goods and rallied suppliers with revival-style meetings that emphasized the importance of creating good-paying jobs at American factories. The initiative has already put U.S.-made bikes, light bulbs, and even televisions on Wal-Mart shelves. 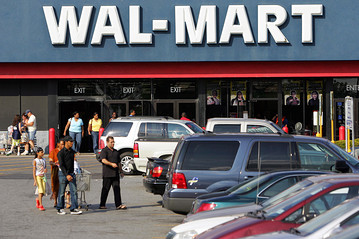 “I’d be more impressed by a bigger number,” says Scott N. Paul, president of the Alliance for American Manufacturing, which advocates for U.S. producers.

The $250 billion goal means the company will spend an average $25 billion more each year—which works out to about 1% of the company’s $279 billion in annual U.S. sales. Mr. Paul says it’s possible that normal growth in their business could mean that Wal-Mart spends that much more on U.S. made products and still expands imports in coming years. He would rather see them set a goal of lowering the share of imported items in their stores.

Another problem, says Mr. Paul, is that more than half of Wal-Mart’s sales come from groceries—and could end up meeting part of its goal by spending more on fresh foods that normally aren’t imported anyway.

Michelle Gloeckler, the Wal-Mart executive vice president in charge of the buy-American program, says a portion of the additional spending will be on grocery items. “But the growth in and of itself of grocery will not get us to that number—we actually have to do something.”

This isn’t Wal-Mart’s first buy-American campaign. In the 1980s, the company ran advertisements that emphasized its U.S.-made products. “The emphasis back then was that they would buy in America if the cost is the same,” says Nelson Lichtenstein, a history professor at the University of California, Santa Barbara, who wrote a book about the rise of Wal-Mart.

“Seems to me there’s good reasons to do this now—because of logistics, certainty of supply,” says Mr. Lichtenstein. “But Wal-Mart has a problem—their customer base is strained” and is having trouble spending more on goods regardless of where they’re made.

American Made, One Part at a Time