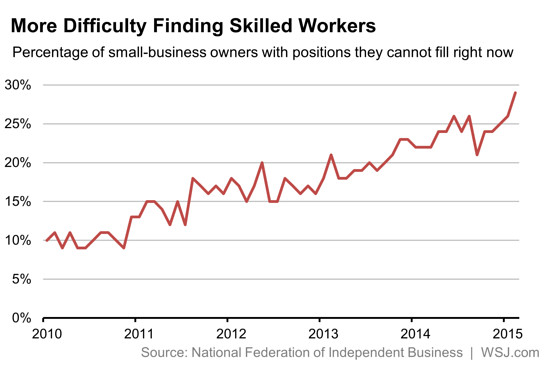 Although small-business owners remain upbeat, a growing percentage reports difficulty in finding workers with the right labor qualifications. By one measure, the skills shortage is the worst since 2006, but most business owners remain reluctant to raise compensation to attract and retain qualified employees.

The National Federation of Independent Business‘s small-business optimism index edged up to 98.0 in February, from 97.9 in January. Both readings are down from 100.4 in December, which was the highest reading since October 2006, before the last recession. Economists surveyed by The Wall Street Journal expected the index to edge up to 98.0.

The small-business sector as a whole is hiring more than firing.  The NFIB found businesses that increased employment added an average of 3.4 workers, while those reducing their workforce cut an average of only 2.9 positions. As a result, the average increase in workers per firm was 0.16 worker, unchanged from January’s solid reading.

Finding good workers remains a problem, the NFIB said. The subindex covering jobs that are hard to fill increased three points to 29%. The report said it is the highest reading since April 2006. Of those looking for workers, 89% said they were seeing few or no applicants who were qualified for the open positions. 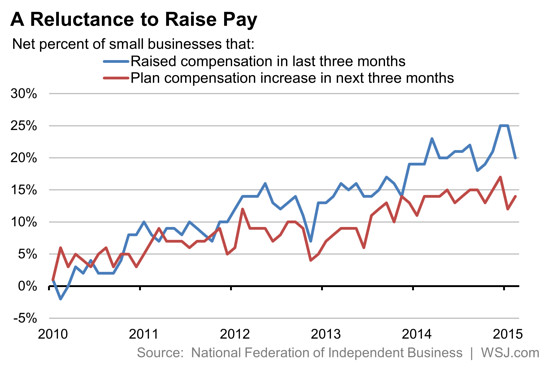 Despite the need to attract skilled workers, only a net 20% of small-business owners said they had raised compensation over the past three months, down from 25% saying that in January. Looking ahead, 14% plan to raise compensation in coming months. That’s up from 12% who said that in January but just below the 15% average of the fourth quarter.

The small-business situation is not much different from the economy as a whole. Hiring has picked up sharply over the past six month, according to the February payrolls report. But yearly wage growth for all private sector workers has been stuck at 2% throughout the expansion.

Blame Employers, Not Workers, for Any Skills Gap, Economist Says

How Some Companies Are Bridging the Skills Gap