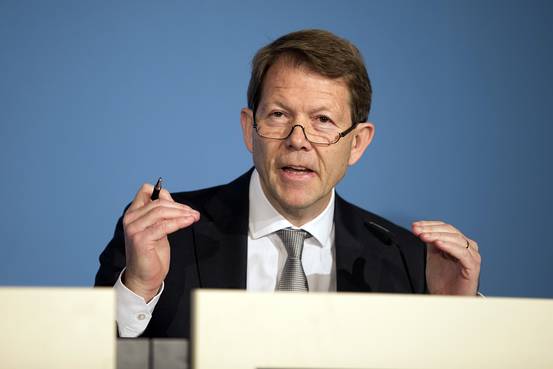 ZURICH–Negative interest rates implemented by the Swiss National Bank two months ago would require more time before they succeed in weakening the franc, a member of the bank’s governing board said on Thursday, adding that the currency remains “significantly overvalued.”

SNB board member Fritz Zurbruegg said that the negative rates and a decision to scrap a cap on the value of the Swiss franc would pose a challenge for the country’s economy. But the rates, which are effectively a 0.75% charge on bank deposits, will help contain the strength of the franc and give the economy room to adjust, he said.

Mr. Zurbruegg’s comments come two months after the SNB scrapped a 3 1/2-year-old policy, which capped the franc at 1.20 francs per euro, a move designed to blunt the strength of the currency as it was pushed higher by investors seeking a safe haven. The policy was designed to protect Switzerland’s export-dependent economy, which is reliant on the eurozone to buy more than half of its exports.

Last week, the SNB maintained its rate for bank deposits at minus 0.75% and stressed it would also intervene in currency markets to counter any renewed strength in the franc.

The franc had surged to above parity with the euro when the SNB dropped the cap on Jan. 15. It has since eased to around 1.05 per euro, but remains overvalued, said Mr. Zurbruegg.

The SNB hasn’t said what level it would like to see the franc weaken to against the euro, but the Swiss currency is now 12% stronger than it was before the cap was dropped in mid-January.

Mr. Zurbruegg repeated the central bank won’t be a “passive observer” of currency market movements and will intervene if necessary to weaken the franc against the euro, the currency of Switzerland’s biggest export market.

The SNB said the changing economic environment and increased pressure on the franc toward the end of 2014 led it to implement negative interest rates on bank deposits. It also cut its target range for the three-month London Interbank Offered Rate — a key interest rate — to negative territory.

The Swiss central bank isn’t alone in imposing negative rates on bank deposits, with the European Central Bank, the Swedish Riksbank and the National Bank of Denmark also charging banks on their deposits.

Negative rates will affect different sectors and companies in different ways and “will certainly pose a challenging phase” for the Swiss economy, but in the long term it should be able to cope with the strong currency, Mr. Zurbruegg said.

Mr. Moser reiterated the franc remains “significantly overvalued” but that the SNB expects it to “clearly weaken over time.”