Some Home Builders Say First-Time Buyers Returning, Others Not Sure – Real Time Economics

The anticipated return of first-time buyers to the housing market remains, like many economic indicators, prone to fits and starts. This week, two more leading home builders differed on whether first-timers are on their way back.

PulteGroup Inc. stirred optimism when it disclosed during its quarterly call with investors on Thursday that sales contracts for its Centex entry-level brand leapt by 26% in the second quarter from the year-ago period. That followed a 29% gain for Centex in the first quarter.

The gain remains significant even when factoring out the surging economy of Texas, where much of Centex’s building occurs. Without Texas, Centex still posted a 13% gain in contracts in the second quarter and a 12% advance in the first.

“To be clear, the entry level does appear to be improving in other markets as well,” Pulte Chairman and Chief Executive Richard Dugas Jr. said on the Thursday call. 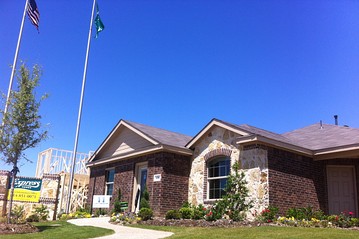 Meanwhile, rival builder D.R. Horton, the largest U.S. builder by closings, provided mixed signals on first-time buyers. On one hand, the percentage of the mortgages originated by D.R. Horton going to first-timers remains low. In the quarter ended June 30, it was 41%, according to data the builder released Friday. That’s down from 42% in the year’s first quarter and down from 54% two years earlier.

Yet, on the other hand, that ratio is likely to take a sharp turn upward in the coming months. D.R. Horton is putting substantial muscle behind the rollout of its entry-level Express brand, which started late last year. Express homes are priced at an average of $156,000. During the builder’s earnings call on Thursday, executives noted that Express already accounts for 7% of D.R. Horton’s sales contracts.

The slightly conflicting signals are reminiscent of the last week of June, when builder KB Home said it had seen signs of a nascent revival among first-time buyers, but Lennar Corp. said it hadn’t yet.

“Whenever you’re talking about something starting, not everyone’s going to see it at the same time,” said Stephen Kim, a Barclays analyst tracking home builders.

Mr. Kim predicts that first-time buyers will start returning in force in the second half of this year, lifting new-home sales from their currently sluggish seasonally adjusted annual pace of 406,000. That’s about 55% of the average annual pace since 2000.

In yet another contradictory figure, Commerce Department data released Thursday show entry-level segments of the new-home market accounting for an increasingly smaller portion of overall sales. For example, new homes priced at $150,000 to $200,000 accounted for 17% of new-home sales in the U.S. in June, down from 20% a year earlier and 22% two years earlier.

Many first-time and entry-level buyers have been sidelined for the past two years for a variety of reasons, including stringent mortgage-qualification standards, mounting student debt and tepid wage growth. The National Association of Home Builders estimates that first-timers will account for 16% of new-home sales this year, down from a range of 25% to 28% between 2001 and 2007.