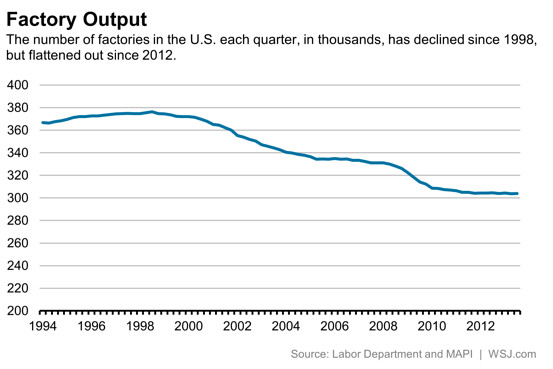 Has the number of American factories finally stopped its long, painful decline?

One economist thinks so. Daniel Meckstroth, chief economist at the Manufacturers Alliance for Productivity and Innovation, a research group in Arlington, Va., regularly does his own calculation of the number of plants based on data from the Bureau of Labor Statistics that tracks factory openings and closings. Even in the darkest days of manufacturing’s long slide, there were factories being built—but their number was far outweighed by the rush to shutter operations. Millions of jobs were lost in the process.

But Mr. Meckstroth says he thinks we’re at an inflection point.

“After a steady decline that continued for over ten years, we’ve finally flattened out,” he says.

From the peak in 1998—when there were 376,000 factories sprinkled across the U.S.—the number fell steadily until about two years ago. However, since late 2012, the number has hovered around 304,000. That’s by far the longest period of stability since before the sector fell on hard times.

Mr. Meckstroth thinks the overall number will soon start to drift up again. “But we’re not going to have a renaissance,” he adds, “in the sense of getting manufacturing back up to the share of the economy it was in the mid-1990s,” unless there’s progress made on reducing the trade deficit in goods. “You just can’t continue to run higher and higher deficits and think the industry is going to be in any kind of a renaissance,” he says.