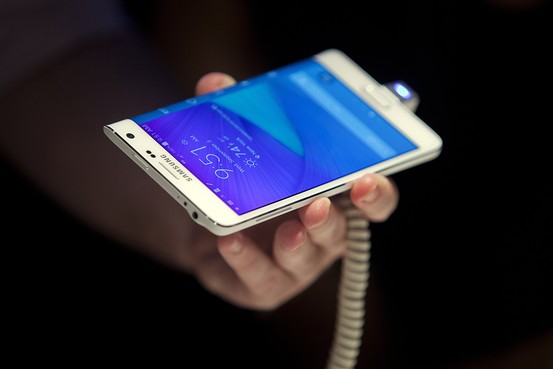 South Korea should focus more on selling finished consumer goods to China in order to turn around another monthly decline in exports to its biggest trade partner, South Korea’s finance ministry said on Friday.

After racking its brains on how to reverse the decline in exports to China following a third-straight monthly fall, South Korea points to China’s fast-growing consumer market as an answer.

The finance ministry in Seoul on Friday suggested that Korea should have its Chinese-bound shipments focus more on consumer goods in the years to come because it expects China to become a $10 trillion-consumer market in 2020, double last year’s $5 trillion figure.

“The Chinese domestic market is rapidly growing in size with consumer demand getting more luxurious and various…but Korea’s exports of consumption goods there are meager,” the ministry said in a report.

Signs of shipments to China losing steam is a big worry for policy makers in Seoul. About half of Korea’s growth comes from exports, one quarter of which go to China. Of the total exports from Korea to China, 72% are intermediate goods like vehicle parts or electronics components and 24% are capital goods. Only 3% are consumer products, the ministry said.

The ministry said it would help Korean exporters market quality consumer goods—organic agricultural and fishery products as well as popular Korean soap operas and films—and high-end medical services to China. To that end, Korea will seek partnership with the e-commerce giant, Alibaba, and local wholesale-store chains in China. 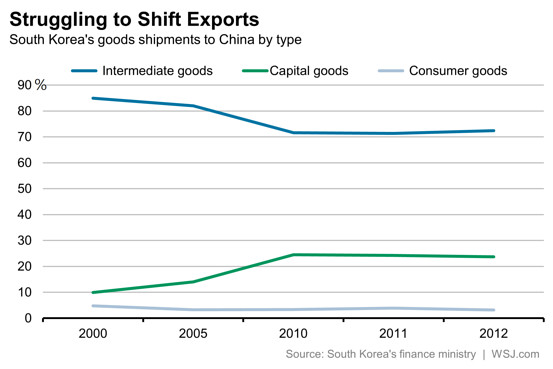 The latest proposal marks a major shift in Korea’s trade policy on China.

Korean firms have so far largely exported partly-finished goods for Chinese manufacturers to assemble into finished products destined for other countries. Chinese companies are now producing more of those intermediate goods on their own and taking fewer from abroad.

Though most Chinese firms have yet to prevail in the domestic finished consumer-products market, some are catching up pretty fast. Xiaomi, a Chinese smartphone maker, replaced Samsung Electronics Co. as the biggest supplier of mobile handsets in China during the second quarter of this year.

Korean exports to China shrank 7% in July from a year earlier. For the first seven months, shipments to China fell 1.4% from the same period of last year.

“The decline in shipments to our biggest trade partner China is feared to have a negative impact on our overall exports in the future, which is a growing external risk,” Finance Minister Choi Kyung-hwan said in an opening address to a meeting with economy ministers on Friday.

“China’s shift to high-end electronics will take time,” Mr. Man said in a report on Friday about China having become the world’s largest electronics exporter since 2003.