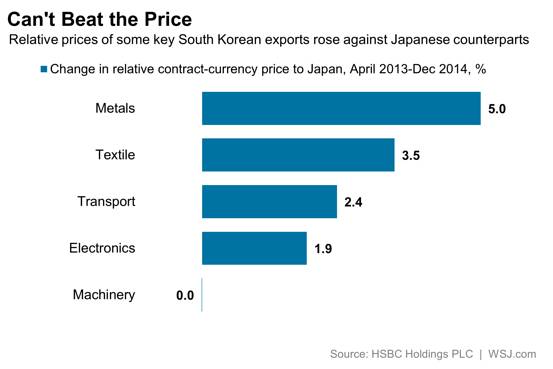 South Korea’s exports are slipping just as Japan’s are picking up, as a weak yen has made Japanese goods more competitive globally.

The situation could get still worse for South Korean exporters if Japanese firms start to cut prices more aggressively in dollar terms to capture market share overseas, says Ronald Man, a Hong Kong-based economist at HSBC. Many Japanese companies have avoided that approach so far, preferring instead to book profits.

“Few economies in Asia are as affected by a weaker yen as Korea, given its strong competition with Japan,” he says.

Earlier Thursday, South Korea reported a modest rise in first-quarter growth of 2.4% on-year, compared with 2.7% in the last quarter of 2014. Net exports were the weakest spot in the data, trimming nearly a third of a percentage point from overall growth.

South Korean manufacturers compete closely with Japan on exports like cars and electronics. That rivalry has intensified amid Prime Minister Shinzo Abe’s two-year campaign to weaken the yen, which has fallen sharply against the dollar.

The relative strength of South Korea’s won—at a seven-year high against the yen—is a big worry for its central bank, which has been criticized by the International Monetary Fund for actively intervening in currency markets. In its semiannual currency report earlier this month, the U.S. Treasury Department chastised South Korea’s currency policy for hurting its trading partners.

Meanwhile, The Bank of Japan’s drive to weaken the yen has paid off for many of its exporters. Japan’s exports rose 8.5% in March on year, after rising 2.4% in February and 17% in January. A weak yen has led to record profits for Toyota Motor Corp., whose shares are up 50% in the past year.

The likelihood of Japan’s exporters cutting prices increases with additional monetary easing by the Bank of Japan, says HSBC’s Mr. Man. Some economists and policy makers have called for more easing to get consumers and businesses spending. Kozo Yamamoto, a ruling-party lawmaker and ally of Mr. Abe,  has long championed this cause.

Weaker exports raise pressure on South Korea’s policy makers to support growth with more stimulus measures, Mr. Man says. He expects the Bank of Korea to cut interest rates by another quarter percentage point in the third quarter to 1.5%. That would follow a rate cut in March and two last year.

The effects of South Korea’s weak exports have rippled through the economy. Wages have stagnated and debt-saddled households—with levels among the highest in the region—have little urge to spend.

South Korea’s economy will have to grow at a much faster pace for the rest of the year to meet the Bank of Korea’s 3.1% growth target, which it cut from 3.4% earlier this month, writes Singapore-based ING economist Prakash Sakpal in a research note. “Without a vigorous export recovery it’s unlikely to happen.”