South Korea’s population is still growing but the impact of one of the lowest birthrates in the world is already being seen in a shrinking young population.

A report released by the government on Thursday showed that South Korea’s youth population last year dropped below 10 million for the first time in decades.

The number of those aged from 9 to 24 stood at 9.8 million last year, accounting for 19.5% of the total 50 million population, according to the report. 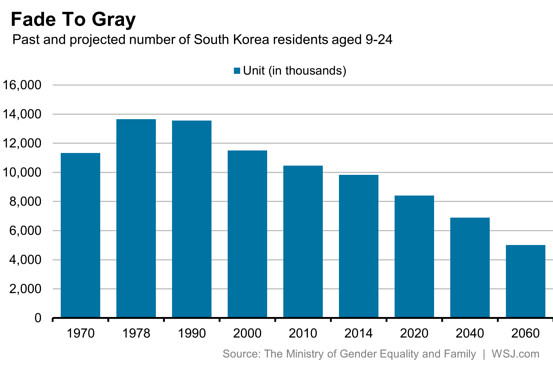 The dwindling number of young people is a major concern for the country’s economic prospects.

Policy makers and experts suggest that women, elderly people and foreigners should be better utilized to make up for the expected shortfall in the labor force, but little progress has been made.

The problem of a falling youth population is set to accelerate. The ministry says that the young people are expected to shrink further to 8.4 million in 2020, 6.9 million in 2040 and 5 million in 2060.

South Korea’s fertility rate – the average number of births a woman gives in her lifetime – stands at 1.24, among the lowest in the world.

The government estimates South Korea’s population will peak at 52.2 million in 2030 before beginning to decrease.