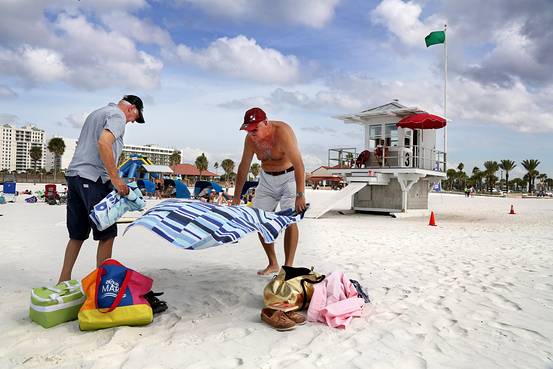 Poul Andersen and Torben Strandberg of Denmark settle into a plot of sand at Clearwater Beach in Florida in November.
DOUGLAS R. CLIFFORD/TAMPA BAY TIMES VIA ZUMA WIRE

Growth in travel spending in the U.S. slowed in the third quarter, as tourists spent less on accommodations and recreational and entertainment activities.

As the labor market firms and gasoline prices remain low, American consumers have been spending more this year on the road, in the air, and at restaurants and bars, boosting employment in the hospitality sector.

In the third quarter, 14,600 jobs were added at bars and restaurants, and air transportation also added 4,500 employees.

Despite the low gasoline prices, spending on “transportation-related commodities” grew 7% in the third quarter, up from 4.5% in the second quarter. This category includes gasoline as well as car rentals and reservation services. Air travel spending grew by 13.3%, a slight deceleration from the second quarter’s 15.1%.

Much of the ongoing growth in spending has come from domestic consumers, as the strong dollar and weakness in overseas economies have made it harder for international visitors to spend big.

Adam Sacks, president of Tourism Economics, said that the strong dollar hasn’t reduced the number of visitors coming from abroad, but has put a dent in spending per traveler. His group estimates that overseas visitation in October was up 4% from October 2014.

A separate report from the Commerce Department showed tourism “exports,” or services consumed by visitors from overseas, have fallen slightly in the first three quarters of the year, compared with the same period in 2014. Meanwhile, American travelers have been keen to take advantage of the favorable exchange rate: travel “imports” rose 7.4% in the first nine months over the year from the same period in 2014. That caused the balance of trade surplus in travel and tourism-related exports to narrow by 17.2% through September.

“I think it’s pretty striking that even though the dollar is so strong against the euro and the Canadian dollar and the Brazilian real has also fallen double digits, that exports have held up as well as they have,” Sacks said. “That they’re only down 1.1% speaks to resilience of international travel markets.”

Spending on U.S. Travel and Tourism Speeds Up Despite Stronger Dollar