Standards are Tighter, Sure. But is It Really That Hard to Get A Mortgage? – Real Time Economics 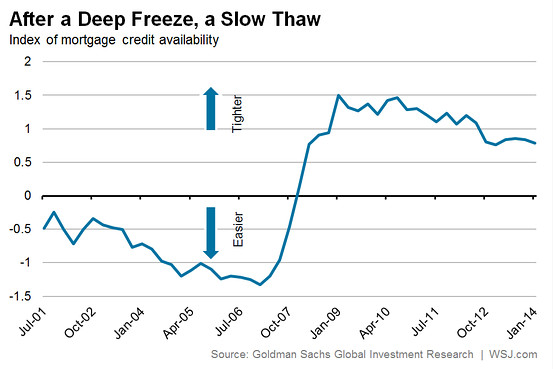 It has become a common refrain: “It’s too hard to get a mortgage.” But is it true?

An analysis from economists at Goldman Sachs tries to shed some light on the question by measuring credit availability along several different dimensions, including common underwriting measures such as credit scores and loan-to-value ratios. The analysis also incorporates indirect measures, such as the share of homes being purchased with cash and the share of loans that aren’t government backed.

The conclusion: Along almost every dimension, mortgage credit is tighter than during the 2000-2002 period, before lenders really relaxed their standards.

This is a potential problem for the housing market because the “next phase of the housing recovery depends crucially on mortgage credit availability,” writes Hui Shan of Goldman.

This also explains why the Obama administration wants banks to ease standards—a position that’s at odds with some lenders, such as J.P. Morgan Chase & Co., which are smarting over legal bills for crisis-era loans.

The Goldman analysis finds that mortgage credit standards have eased a touch over the last two years, but compared to the normal level observed in 2000-2002, “mortgage credit supply is still significantly limited,” says Ms. Shan.

Only in one of the seven categories does Goldman find that credit standards are less restrictive than before the bubble: Average loan-to-value ratios, which are primarily a function of a borrower’s down payment, are slightly higher. While no-money-down lending programs have largely disappeared, the Federal Housing Administration will insure mortgages in which borrowers have made just 3.5% down payments, and those programs have been incredibly popular in recent years. 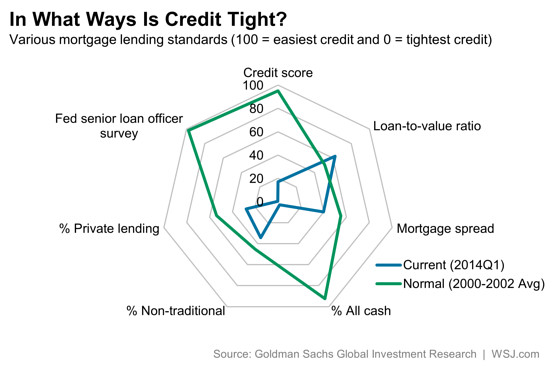 But wait a minute. If it’s possible to get a mortgage with a 3.5% down payment and a credit score in the mid-600s, how could anyone say that credit is still tight?

To answer that question, it’s worth examining a few mortgage market dynamics that have developed over the past five years. Most banks today are primarily making loans that qualify for sale to loan giants Fannie Mae and Freddie Mac or that qualify for FHA insurance. Because lenders have had to pay tens of billions of dollars to buy back defective loans sold during the bubble, they’ve instituted lots of additional checks, known as overlays, to make sure new mortgages couldn’t possibly run afoul of program rules.

“Rather than cutting off access to mortgage credit for a subset of households, ongoing credit tightness more likely takes the form of strict underwriting procedures applied to all households,” write Jordan Rappaport of the Federal Reserve Bank of Kansas City and Paul Willen of the Boston Fed in a recent paper.

As a result, the market has bifurcated. Wage earners who have decent credit, stable and easy-to-verify incomes and who are seeking loans on simple single-family dwellings can qualify for FHA-backed loans with the minimum 3.5% down payment. Getting a mortgage for this group of buyers might be easier than is commonly believed, although FHA mortgage insurance has become more expensive.

When people talk about “tight credit,” they may instead be referring to a second group of borrowers. These are people who may have irregular or harder-to-document incomes: A salesman who earns a lot of his income in commission; a consultant who had meager income two years ago; or a small business owner who took lots of tax deductions to lower her taxable income. This group also includes buyers of condominiums or other harder-to-underwrite properties. And it could include retirees who have meager incomes despite having lots of assets.

Messrs. Rappaport and Willen say any lending roadblocks could be cleared if regulators and investors clarify “what constitutes approved lending.” The FHA says it’s working on a series of policies to help provide lenders certainty.

Still, Ms. Shan says the process of credit easing is like to take multiple years given regulatory headwinds in the market.