The Federal Reserve will likely begin raising interest rates at a gradual pace in June of 2015 after leaving them near zero for an unprecedented six-and-a-half years, according to the median estimate of economists surveyed by The Wall Street Journal.

That outlook is based on the assumption among most of the 48 private economists surveyed June 6-10 that the U.S. economy will post a strong second half after a shaky start to 2014. Not all economists responded to every question.

U.S. gross domestic product shrank at least 1% on an annualized basis in the first quarter, and probably by more when the estimate is next revised by the Commerce Department.

The “Fed will start raising [the] key funds rate earlier rather than later,” said Allen Sinai, chief global economist and strategist at Decision Economics, Inc., who was among those predicting a first rate increase next June.

Lawrence Yun, chief economist at the National Association of Realtors, predicted Fed officials will move sooner, by next May, after “inflation comes out stronger than expectations.”

Diane Swonk, chief economist at Mesirow Financial, expects the Fed to wait until July 2015 to start raising rates, saying, “inflation is going to be too low to do it sooner, and next year’s voting members of the [Fed’s policy committee] will be much more dovish than this year’s composition of voters.”

The bleak first-quarter figures have dampened some of the rosier yearly forecasts. But the view that growth will finally reach a steady 3% annual clip as the year progresses—and retain or surpass it in 2015 and 2016—remains fairly entrenched.

Fed officials won’t raise interest rates much in the next two years, according to the economists’ expectations. The midpoint of projections for the benchmark federal funds rate among economists in the WSJ survey was 1% in December 2015 and 2.5% in December 2016. That compares with 1% and 2.25% respectively when analysts were surveyed in March. 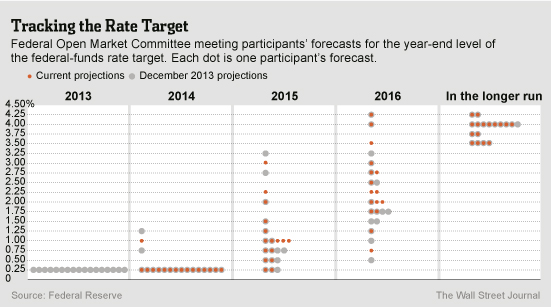 Inflation remains well below the central bank’s 2% target, and Fed officials expect it to remain short of that goal for a while. Unemployment, in the meantime, remains elevated, at 6.3% in May, though well below its recession peak of 10%.

The dot graph and policy makers’ economic estimates are due for a quarterly refresh at the Fed’s policy meeting next Tuesday and Wednesday.

As for the exact path of the Fed’s exit strategy, recent chatter from policy makers appears to signal a subtle change. The Fed seems increasingly likely to continue reinvesting the proceeds of maturing securities in its portfolio rather than halt reinvestment before starting to raising interest rates. The combination of tools is also still under discussion, officials say.

“The Fed will keep the balance sheet elevated for some time after it ends asset purchases,” Ms. Swonk said. “This is a shift from the Fed’s roadmap.”

Since December 2008, the Fed has held short-term interest rates near zero and purchased more than $3 trillion in mortgage and Treasury bonds in an effort to spur stronger growth. The current round of monthly bond purchases was controversial within the Fed and is being wound down by $10 billion per meeting. Economists in the Journal poll expect the central bank to maintain the steady pace of reductions, halting new asset purchases altogether in the fourth quarter. 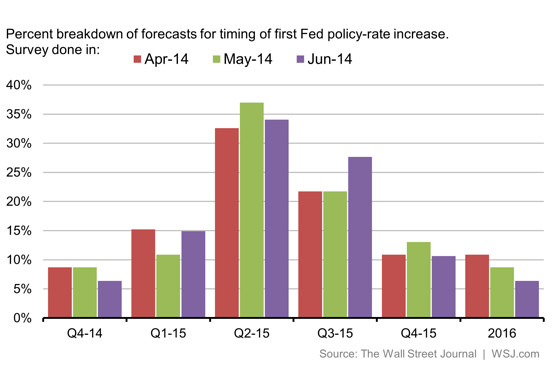