It’s not just moms who are staying home with the kids in greater numbers. More dads are doing it, too.

In 2012, there were 2 million U.S. fathers who lived with their children but did not work outside the home, nearly double the 1.1 million in 1989, the first year for which data are available, according to a Pew Research Center report released Thursday. The number of “stay-at-home dads” actually peaked in 2010, at 2.2 million. 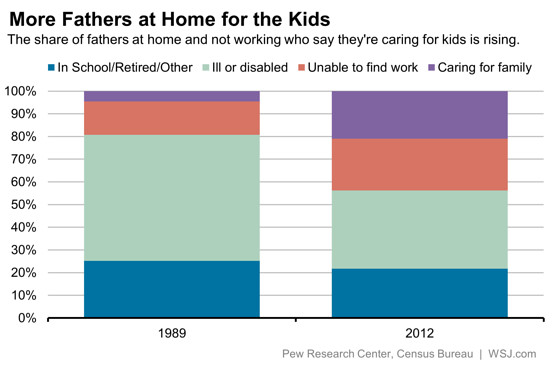 Pew analyzed U.S. Census Bureau data on men 18 to 69 years old who were living with their own children under 18 (whether biological, step- or adopted-children) and who were not employed for pay at all outside the home over the prior year. (Pew excluded fathers not living with any of their children.)

The vast majority of stay-at-home parents are still, of course, mothers. An earlier Pew report found that, after decades of decline, the share of mothers staying at home with children has risen recently.

A disturbing finding in Pew’s report is that roughly half (47%) of stay-at-home dads are officially poor, compared with just 8% of working fathers (defined as those who have had any work over the past year, even part-time). While the percentage of stay-at-home moms who are poor is also high, it’s considerably lower at 34%.

Black fathers who live with their children are the most likely to be stay-at-home fathers, compared with Hispanics and Asian-Americans, and especially white fathers—partly due to higher joblessness rates.

Meanwhile, those saying they’re home either for their kids, or because of joblessness, is rising. Roughly equal shares of working fathers and mothers in the U.S. now say they would prefer to be at home raising kids, but need to work to get income.

“The rising number of dads who are home primarily to care for their family has driven the long-term growth in ‘stay-at-home dads’,” said Pew senior researcher Gretchen Livingston.

The Census Bureau, which uses a more restrictive definition of “stay-at-home” dad—the children must be under 15, the couple married, and the father needs to say he’s home for a year to care for kids—puts their number much lower, at 214,000, versus Pew’s 2 million.