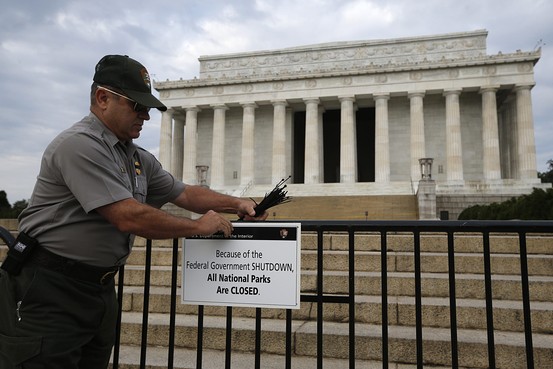 A National Park Service worker places a sign barring visitors to the Lincoln Memorial in Washington in 2013.
Reuters

The 2013 partial government shutdown had lasting effects for some federal workers already short on cash, a reminder of the personal cost from the political standoff.

“Those with the least liquidity struggled most to smooth spending and were left holding more debt months after the shutdown,” a new study concludes.

After Congress failed to sign off on a budget, the federal government partially shut down for 16 days in October 2013, sending more than 800,000 workers home without pay, forcing others to stay on the job without a paycheck and closing various operations across the country.

The study, which digs into data accumulated through the online mobile banking application Mint Bills, shows typical federal paychecks fell by 40% during the first pay period of the shutdown. By the second, things were largely back to normal after Congress agreed to back pay for most federal employees.

Even though the disruption was temporary, federal workers responded by curtailing expenses–spending dropped sharply during the shutdown—and shifting the timing of payments, according to research by Michael Gelman and Matthew Shapiro from the University of Michigan, Shachar Kariv and Steven Tadelis at the University of California at Berkeley, and Dan Silverman at Arizona State University.

Most were able to absorb the short-term shock. “Many of those affected by the shutdown changed from paying their mortgage early in October to later in the month,” the authors said.

But people who already were in precarious financial condition had fewer options. They turned to credit card debt to cover the brief squeeze and then struggled to pay that off even though the shock was brief and left lifetime earnings unchanged.

“These consumers, who were already carrying revolving debt on their credit cards, apparently lacked sufficient capacity to adjust using low-cost financial instruments,” the authors said. “As a consequence, they turned to expensive credit to fund their spending during those two weeks, and appear to hold that excess debt at least nine months later.”