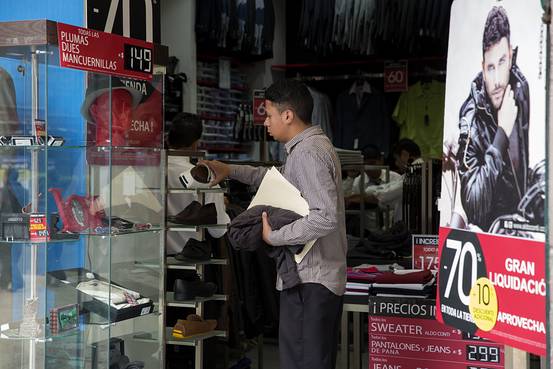 A man shops for shoes in Mexico City in February. The economic recovery in the U.S. is helping spending as immigrants send more money home to their families.
SUSANA GONZALEZ/BLOOMBERG

It’s no surprise that most of the money Mexicans send home from abroad comes from the north of the border. After all Mexico is the largest single source of immigrants in the U.S.

Of the $5.73 billion transferred home to Mexico in the first quarter, $5.6 billion was from the U.S., according to a new breakdown the Bank of Mexico began publishing this week.

First-Quarter Remittances to Mexico by Country

Transfers in minuscule quantities are reported from such unlikely places as Albania and Botswana, although the clear No. 2 source is Canada, with $21.7 million in the first quarter. Others that regularly make the cut above a million dollars include Spain, the U.K., El Salvador and Guatemala.

Although numbers are only available back to 2013, in Canada there appears to be a trend that may have to do with snow. Transfers diminish noticeably in the fourth and first quarters, corresponding to winter months, while rising sharply in the spring and summer.

The Bank of Mexico also offers some insight into which U.S. states are the main sources of money transfers home to Mexico. No points for guessing California in first place at $1.6 billion for January to March, followed by Texas at $764 million and Illinois at $289 million.

Growth in U.S. employment has been behind the increase in overall transfers, which have been expanding steadily since mid-2013 after several years of declines, but have yet to repeat the record $26.06 billion reached in 2007 before the global financial crisis took its toll. The U.S. housing crisis had a particularly hard impact on migrant construction workers.

In March, Mexicans sent home $2.26 billion, a 7.6% rise from a year before and a record for the month. In peso terms, the amount has grown even more and is widely seen contributing to the incipient recovery in private consumption.

“We expect workers’ remittances in dollars to firm slightly in 2015, given the brighter outlook for growth and employment in the United States,” Goldman Sachs economist Alberto Ramos said in a note. “Furthermore, a weaker peso and low domestic inflation boost the local currency real purchasing power of the remittances’ flows.”

Banorte economist Alejandro Cervantes attributes the increase in part to the weaker Mexican currency, as recipients get more pesos for each dollar, and to the strong performance of the U.S. labor market.

Citing U.S. Census Bureau statistics, he notes a declining trend in unemployment among Mexican workers in the U.S. since July 2014, with an increase in the total number of Mexicans employed “suggesting that the flow of remittances will continue to show a better performance in the future, since Mexican migrants without U.S. citizenship tend to send a larger amount of remittances than migrants with citizenship.”

Mexicans make up more than half of the unauthorized immigrants in the U.S., according to the Pew Research Center, although the numbers have declined from a peak in 2007 with fewer Mexicans heading north across the border, and more returning home.

How the Tally of Illegal Immigrants Adds Up, and Why It Matters