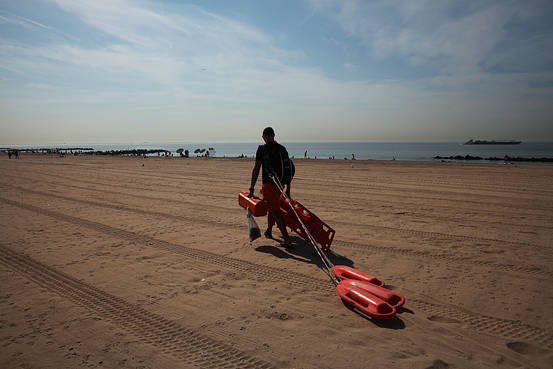 A lifeguard walks to his post at Coney Island on a hot morning in July.
SPENCER PLATT/GETTY IMAGES

Young Americans may be spending more time lounging by the pool than on duty in the lifeguard chair or at other summer jobs.

The youth-unemployment rate fell in July fell to its lowest level since the recession began, but part of the reason is that four in 10 Americans between 16 and 24 years old didn’t work or seek a job this summer.

The unemployment rate for those between 16 and 24 years old fell to 12.2% in July from 14.3% a year earlier, on a non-seasonally adjusted basis, the Labor Department said Tuesday. That’s the lowest July reading since 2007, five months before the recession began, and matches the historical average since 1948. 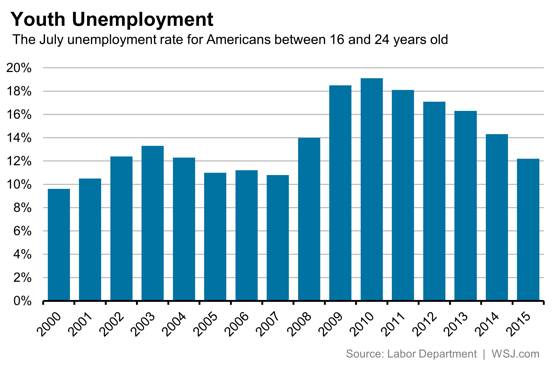 As is typical, the level is well elevated compared with the jobless rate for all adults, which was an unadjusted 5.6% last month.

But the share of youth participating in the labor force fell to 60% in July from 60.5% last year. Last month’s reading is the second-lowest July figure on record, just above 59.5% in 2011. The historical average is 69%.The peak labor-force participation rate for youth was 77.5% in 1989. The government closely tracks July figures because the month is the usual peak for youth employment.

The falloff in the youth labor force in notable because it follows the same pattern as the wider population. But at least part of the broader decline has been blamed on an aging Americans choosing to retire.

As recently as the early 2000s, labor-force participation among young people exceeded that of the broader population during the summer. 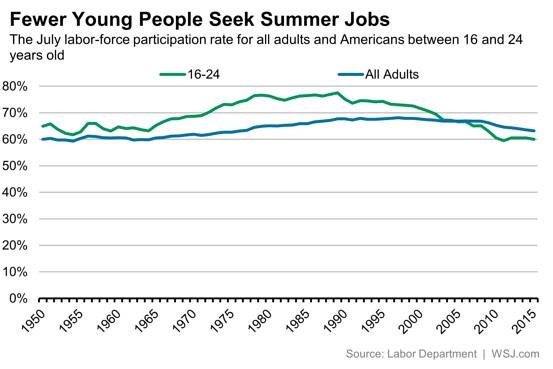 Young people might not be looking for work for several reasons.

They could be more focused on their educations. The deep recession and slow recovery also encouraged Americans to enroll in school rather than pursue full-time jobs. While that doesn’t necessarily preclude them from taking summer work, it does reduce the number of Americans younger than 25 in the year-round labor pool. But a better labor market caused college enrollment to dip in the past year.

During the slow recovery, young people also competed for jobs at restaurants, retailers and other entry-level employers with more experienced workers who lost better-paying jobs during the recession. That competition could have discouraged some younger people from looking for work.

Others could be volunteering, taking unpaid internships, traveling—or simply relaxing.

In Praise of the Teen Summer Job

U.S. College Enrollment Has Dropped Nearly 2% Over Past Year

Black Unemployment Falls Below 10%, Still Twice the Rate for Whites