The U.S. Department of Agriculture released a study this week showing the average middle income family will spend $245,340 to raise a child to the age of 18 — even before paying for college tuition.

A cool quarter million to raise a child sounds like a horrifying amount of money. Who has that sort of cash lying around? The median family income in the U.S. was only $51,017 in 2012, according to the Census Bureau.

But a closer look at the numbers behind the USDA’s report shows less cause for concern than the blaring headline might suggest.

For one thing, we’re talking about the cost of having the sole responsibility to feed, shelter, clothe, transport, educate, and care for a living human for almost two decades. This is obviously a significant undertaking. But per year, that $245,340 works out to about $13,000 a year. 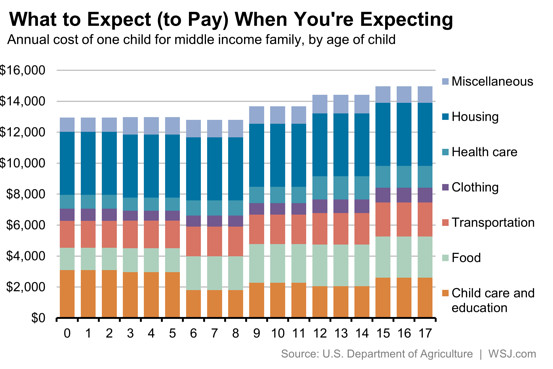 The Department of Agriculture calculates these expenses based on a family earning, on average, $82,790 a year. If you say the median family earns about $50,000 and needs nearly a quarter million dollars to raise a child, it sounds terrifying. If you say that families earning around $80,000 a year spend $13,000 of it on their kid, it’s not quite as scary. Families earning less money raise their children on less than $10,000 a year, according to the report.

And a closer look at the methodology casts some of the numbers in a new light. The report calculates the cost of housing by looking at the expense of buying a home with an additional bedroom. If you’d otherwise planned to live in a one-bedroom condo your entire life, this is an extra cost. But if you planned on buying a 3 or 4 bedroom house anyway, this is not really an additional expense of parenthood. That extra bedroom assumption alone accounts for $4,000 a year in expenses, or about $73,000 of the cost of raising a child until age 18.

The cost of some transportation and other miscellaneous items are calculated on a per-capita basis, in the estimate. So if there’s two parents and a child, spending $3,000 on some item, then $1,000 of that is assumed to go to the child. That assumption may or may not be applicable for your family.

To find its number, the Department of Agriculture used a survey from the Labor Department called the Consumer Expenditure Survey for its report. So let’s consider how terrifying the costs of many ordinary items sound when you calculate them over years or decades.

Here’s how much people at different ages spend, on average, on a few randomly selected items like liquor, groceries, car insurance, etc. The definition of people here is “consumer units,” so basically a mix of individuals and families.

The average person or family age 25-34 is spending $2,799 at restaurants and $554 on alcohol. That works to about $230 a month eating out and $45 a month on booze. That sounds about right. Perhaps one ought to drink a little less and cook at home a little more often, but nobody’s perfect.

Yet assuming that person works from age 25 to 64, then over the course of their career those expenditures come out to a staggering $140,000 spent on booze and restaurants. Throw in the groceries over the course of a career and you’re talking an extra $169,000. People spend more money eating and drinking — more than $300,000 — than they spend on the median home.

Even a small item like footwear comes out to $16,000 when you stretch it over a long enough period. People spend so much money on shoes they could buy a car with cash instead.

But a car doesn’t last a lifetime. You have to keep buying new ones, filling them with gas, maintaining them. Over the course of your career, the average person will spend $398,000 on transportation, with $43,000 of that going to car insurance. That’s enough for a lake house and a boat.

And of course, people don’t buy housing all at once in cash either. They take out a mortgage, fix the roof, paint the walls, and so on. Over one’s career that might cost $744,210, according to the data.

There’s no doubt a long middle-class life in America is an expensive proposition. But the key reason these numbers sound so enormous is because we’re not accustomed to thinking of how much day-to-day and month-to-month costs amount to when tallied over the decades. Calculating cumulative costs over years and decades makes everything sound insanely expensive.

So here’s some good news to keep that in perspective: the average person earns lots in their lifetime too. That family that spent $250,000 on their kid? Their earnings work out to about $1.5 million by the time the kid reaches age 18. And for a family earning the average amount of salary, interest and social security and retirement income, over the course of their life, they’ll earn nearly $3.5 million.

That’s the sum of their earnings, not the savings they end up with. Taxes and everything else in life eats most of it away. But it helps explain why it’s not madness to cumulatively spend $250,000 on raising a kid to age 18. Or to spend $16,000 on shoes. 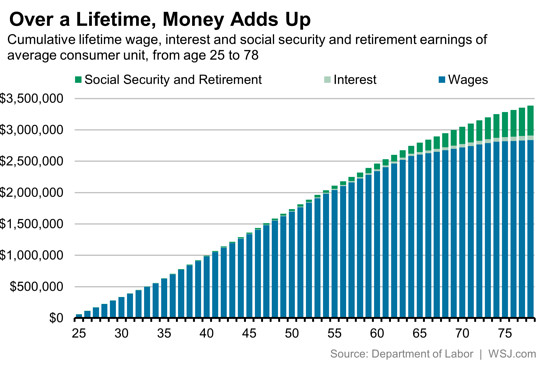