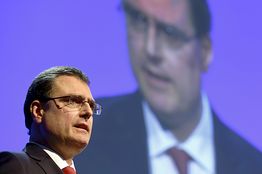 Mr. Jordan said low interest rates around the world had created an extremely difficult environment for the Swiss economy, a situation that is exacerbated by a Swiss franc that is “significantly overvalued.” The situation required the central bank to begin applying negative interest rates in January, a move designed to curb demand for the franc, he said.

Mr. Jordan said negative interest rates will play “a very important role” until upward pressure on the franc eases and the global economy recovers further. He made the comments in a prepared text of a speech to be delivered at the SNB’s annual general meeting.

The annual general meeting is the central bank’s first since it ditched a three-and-a-half-year policy of capping the franc at 1.20 per euro and introduced negative interest rates, effectively a charge on banks’ deposits with the SNB.

The move sent the franc soaring, especially against the euro, and triggered criticism from politicians and business leaders, who worried it would hurt the country’s economy because the 19-nation eurozone buys roughly half of Switzerland’s exports.

Despite scrapping the cap, the SNB will still monitor exchange rates and intervene in the market to influence monetary conditions, Mr. Jordan said. He said the high franc would moderate in the future.

“The Swiss franc is significantly overvalued overall,” he said. “A correction of this overvaluation is to be expected over time.”
Still, the end of cap meant lower economic growth for Switzerland and heralded more difficult times ahead for the country, he said.

Since the cap was removed on Jan. 15, the franc has risen steadily toward parity with the euro as a European Central Bank stimulus program and concerns about an exit of Greece from the eurozone lure nervous global investors into Swiss assets.

The franc is currently trading around 1.03 francs per euro. The franc has traded at this level for roughly two weeks.

Analysts say the SNB is unlikely to use tools like quantitative easing, the printing of currency to buy bonds and other assets, or cut rates deeper into negative unless the franc rises above parity with the euro. Otherwise, it will use periodic interventions to curb its strength.

“The SNB is a hostage to developments in the eurozone and it’s not a pleasant situation to be in,” said Thomas Stucki, an analyst at St. Galler Kantonalbank and a former SNB asset manager.

Still, the economy seems to be defying the strong franc with gains in the dollar helping to fuel a 22% rise in exports of chemicals and consumer goods to the U.S. in March, data showed Thursday.

Steady exports, coupled with a small decline to 3.4% in the March jobless rate, suggest the Swiss economy could even gain slightly in the first quarter, according to Credit Suisse economist Lukas Gehrig. “Things may not turn out as badly for the economy as many had feared when the SNB scrapped the cap,” he said.