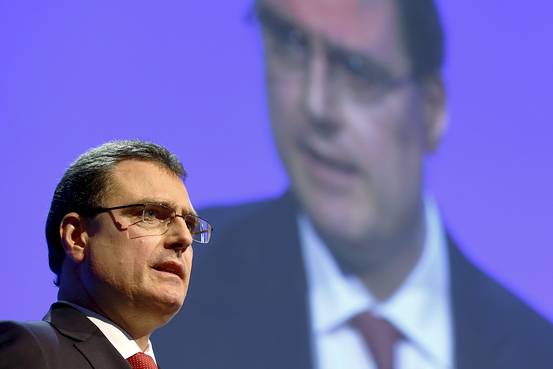 The Swiss National Bank swung to a record loss in the first quarter as the strong franc eroded the reported value of its euro reserves, raising the prospect it won’t be able to make payments to Switzerland’s federal and regional governments.

On Thursday, the SNB reported a loss of 30 billion Swiss francs ($31.9 billion) in the quarter ended March 31, compared with a profit of 4.4 billion francs in the same period a year earlier. The quarterly loss was the bank’s biggest since the second quarter of 2013, when it recorded an CHF18.5-billion loss.

The red ink was almost entirely caused by the erosion of its huge euro holdings, which fell in Swiss franc terms after the SNB abandoned a 3 1/2-year-old policy of capping the franc at 1.20 euros in January. Roughly half of the bank’s CHF560 billion in foreign-currency reserves are held in euros, which have fallen around 13% against the franc since the repeal of the cap.

The Zurich-based central bank said it lost CHF29.3 billion on foreign currency positions. It also recorded a CHF1-billion loss on its gold holdings, which are denominated in dollars.

The SNB said in a statement its results depend largely on developments in the gold, foreign exchange and capital markets. “Strong fluctuations are therefore to be expected,” it said.

The huge loss raises the prospect the SNB may need to suspend customary payments it makes to Switzerland’s federal government and 26 cantons, which are akin to U.S. states. The payments are politically sensitive in Switzerland, where many of the country’s smaller cantons rely on them to help balance their accounts.

“This massive loss with have a lasting sting on the psyche at the SNB and politically within the cantons,” said Peter Rosenstreich an analyst at Swissquote Bank SA. “The cantons certainly won’t like these results.”

The SNB came under fire when it canceled the payments in 2013 for the first time in its history after suffering an annual loss driven by falling gold prices.

Cancelling the payments might compound pressure on the SNB, which has been criticized for initiating negative interest rates on deposits it holds as part of effort to blunt the strength of the franc. Critics say the negative 0.75% rate – and effective charge – is a penalty to savers, especially because it has been levied on government-run vocational pension funds and other private funds.

An SNB spokeswoman said it was too early to make assumptions about the full-year result and the possible distribution of profits.

But SNB officials have already hinted the payments could be canceled. Last week, Jean Studer, the head of the bank’s supervisory board, warned the bank’s performance might be “significantly” impaired because of the repeal of the currency cap.

The cap was designed to protect the country’s economy, which relies on exports, particularly to the 19-nation eurozone. Many smaller companies have been strained by the rise in the franc, which reduces their repatriated income, though larger companies with more diversified revenue streams have weathered the situation better.

SNB, like most other central banks, is tasked with securing price stability and isn’t obligated to make a book profit. The bank, which is publicly traded like the central banks of Japan and Belgium, has private shareholders in addition to the federal and regional governments.