Elysse Mata remembers the day she found out she was having twins, and the shock when she heard they were conjoined.

“I was speechless, it was so unexpected,” she said.

Elysse and her husband John, of Lubbock Texas, already had one child, 5-year-old Azariah, and now were expecting conjoined twins. Texas Children’s Hospital in Houston was ready for this delicate case. On April 11 at 3:41 a.m., the identical conjoined twin girls were born, Knatalye Hope and Adeline Faith at 31 weeks, weighing 3 pounds, 7 ounces each. 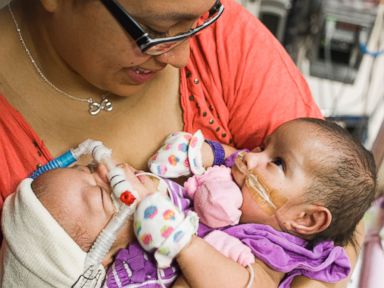 Conjoined Twins Come Home For the Holidays After Separation

The girls share a liver, diaphragm, pericardial sac (the lining of the heart) and intestines. Their health was so fragile it was a week before their mom could hold them.

“I cried, and I kissed them, they were probably irritated I kissed them so much…every time I hold them now it takes my breath away.” 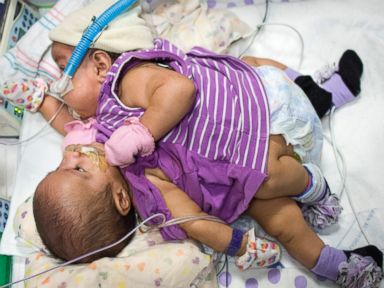 The twins now weigh 10 pounds and 4 ounces, and are still in level IV intensive care unit at Texas Children’s Hospital, where doctors are waiting for the girls to gain enough weight for the surgery to separate them.

Dr. Stephen Welty, chief of Neonatology at Texas Children’s Hospital, says the outlook for these girls is very good, “The way they are conjoined holds the most promise for a successful separation, and we have a very good team in place when they are ready.”

Elysse Mata says she believes the surgery will be successful. The girl’s middle names are Faith and Hope. “You can’t have faith without hope and hope without faith.”

The twins have very distinct personalities she says. “Knatalye is very feisty, she talks, she is so happy, she is always awake and she loves to play. Adeline loves to play, but she is quiet, and laid back, more like me.”

She doesn’t let the statistics scare her, she says watching her girls smile gives her confidence the surgery will be successful and next year her girls will be back home in Lubbock. “My family has been so blessed, and these girls are our special miracle,” she said.

Doctors said the surgery is expected to be done when the girls are eight months old.