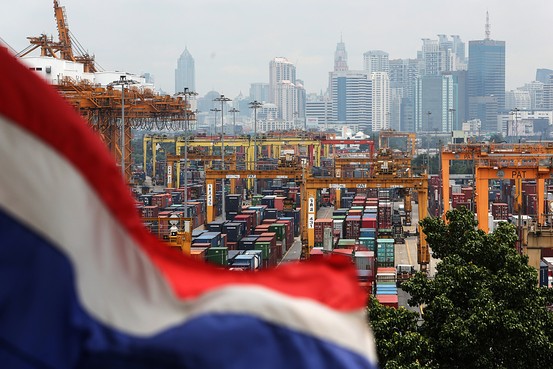 Stacks of containers at the Port of Bangkok in Thailand.
Bloomberg News

Thailand’s central bank governor Wednesday said he is reassessing what to do with monetary policy now that the country’s armed forces have restored a functioning – and, potentially, high-spending – government.

For months, Prasarn Trairatvorakul and his colleagues at the Bank of Thailand have largely held to an accommodative approach to setting interest rates.

Usually one of Asia’s more hawkish central banks, the Bank of Thailand this year has kept policy rates at a relatively subdued level of 2.0%, cutting them by 0.25 percentage point in March.

The goal was to keep Thailand’s economy ticking over during months of disruptive street protests that effectively shut down the operations of the previous elected administration.

Fiscal policy for much of the year had been missing in action, Mr. Prasarn told an investor conference here.

But now the game is changing. “As of now, I think the Thai economy has bottomed out in the second quarter,” said Mr. Prasarn. “The prospects look brighter and I think the engine of fiscal policy should come back to function again to support the economic growth.”

This doesn’t necessarily mean that policy rates are about to shoot back up. Interest rates, Mr. Prasarn said, are just one policy to encourage price stability, adding that “one should not try to use one policy instrument to solve many problems.”

Rather, Mr. Prasarn’s remarks indicate that the central bank will now have to take stock of the potential impact of government spending in the months to come.

Since the May 22 coup d’état that removed a government supported by populist billionaire Thaksin Shinawatra, Thailand’s new military leaders have installed a new administration that has set out boost the country’s flagging economy.

Among other things, the junta freed up $3 billion to pay off farmers awaiting funds from a collapsed subsidy program and signed off on plans to spend up to $75 billion to upgrade train lines and other important infrastructure over the rest of the decade.

The junta has had some initially positive results. The economy expanded 0.4% on year and 0.9% on quarter in the second quarter of the year after contracting sharply in the first three months.

There could be more to come. With army chief Gen. Prayuth Chan-ocha formally becoming prime minister earlier this week, the army is cementing its power and is aiming to limit the influence of populist leaders such as Mr. Thaksin and his sister, former prime minister Yingluck Shinawatra, before allowing new elections by the end of next year.

“We are gratified that our intervention in May is already having a beneficial effect as confidence has been restored and the economy is recovering well,” Marshal Prajin said at the same conference.

The central bank chief, though, noted that the military will need a significant buy-in from investors if it is to meet its goals. “It is important to note that resources and infrastructure built by the government and central bank are not sufficient in themselves to lift the economy’s growth potential,” said Mr. Prasarn. “Cooperation of financial and business sectors is vital for lifting growth potential.”