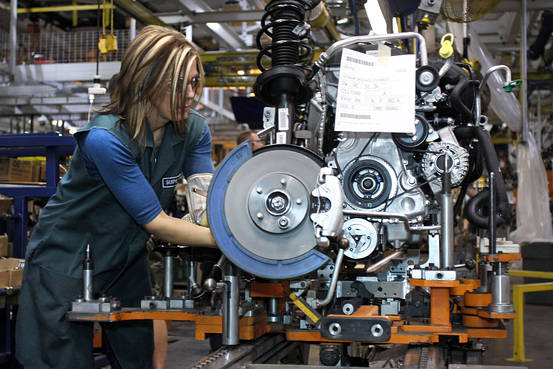 The Economic Policy Institute argues women’s wages haven’t kept pace with productivity since the 1970s, and closing the gap—along with the gender wage gap—would require a 71% boost.
BILL PUGLIANO/GETTY IMAGES

Try this thought experiment: Close your eyes, and rewind a little more than 35 years ago to 1979. Pretend that both women and men earned the median wage at the time, a cool $16 an hour (in fact, men earned $20.13 and women made $12.61, but leave that aside for the moment). Now, as you fast forward to 2014, imagine that wages keep pace with rising productivity, bringing the median hourly wages for all workers to $26.04.

Now open your eyes and look at the sobering reality. Women’s real hourly earnings in 2014 were just $15.21. That translates to a 71% “gender and inequality wage gap,” the key finding of a new report from the left-leaning Economic Policy Institute. Economist Elise Gould and researcher Alyssa Davis calculated that gap by combining EPI’s favorite bugaboo, the pay-productivity gap, and that old standby, the gender pay gap. (A previous report on productivity and wages kicked off a vigorous back-and-forth between economists—how you measure matters.) For blacks, whites and Hispanics, they found that women’s wages have risen faster than men’s. But both women and men have experienced little growth in pay in real terms, especially relative to the economy-wide increases in productivity. Overall, men’s wages have actually declined in real terms to $18.35, and Hispanic men have fared worst of all: their wages are nearly 10% lower than they were in 1979. To Ms. Gould, that makes the narrowing of the gender pay gap over the past 35 years a pyrrhic victory.

Many factors have driven women’s faster pace of wage growth, including their disproportionate gains in education and entry into new and higher-paying occupations. Men, by contrast, have been harder-hit by forces like the decline in unionization and the loss of manufacturing jobs. The gender pay gap has closed the most at the bottom of the income scale, where minimum-wage laws even out the floor for all workers, and is largest at the top of the pay scale, where men are more likely to reap the outsize rewards for jobs that require working around the clock. Ms. Gould proposes a number of fixes, many of them similar to those that accompanied EPI’s recent (gender-neutral) paper on pay and productivity: conduct monetary policy with an eye towards full employment, raise the minimum wage and restore collective bargaining rights. But others have more relevance to female workers, such as raising the tipped minimum wage and guaranteeing paid family leave.

She acknowledged that today’s political climate made legislation around these issues unlikely, but she said the 2016 presidential campaign was a great opportunity to “think big, put out big ideas and be more ambitious.”

Journal Report: Women in the Workplace