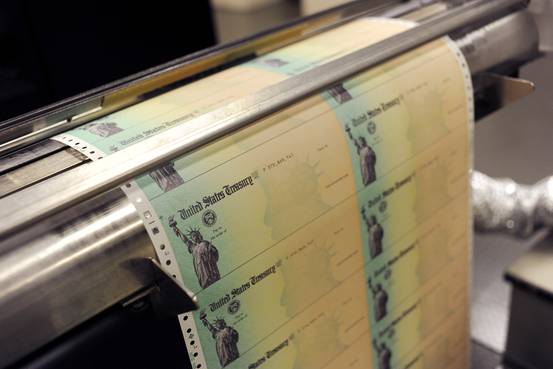 Americans can increase their Social Security benefits by waiting until their late 60s to start collecting their checks. But most claim their benefits early, costing themselves significant money, according to a new government study released Thursday.

To try to help seniors make better decisions on managing their benefits, the Consumer Financial Protection Bureau rolled out an online tool to accompany the study. The simple interactive requires the user to put in his or her birthday and peak annual work income. It then provides the estimated benefit amounts depending on the age when the benefits are claimed.

Under the rules of the Social Security system, senior citizens have the discretion to start collecting the government checks anytime between their 62nd and 70th birthdays. But they receive more if they wait till their “full retirement age,” which is defined as 66 or 67, depending on when they were born. And they get even bigger checks if they wait until age 70.

And yet, in 2013, 1.7 million consumers, or 75% of those in the eligible group, claimed their Social Security benefits before their “full retirement age.” Among them, 46% of the total did so at the earliest eligibility age of 62, according to the CFPB.

When to begin collecting benefits is a highly personal choice. For those who don’t expect to live long, starting to collect early certainly makes sense. But for many American who live well into their 80s, an early start comes at a significant economic cost.

Here is a look at the potential benefits for someone who turns 50 today and has an annual income of $32,140 – the median income for those over 25. If she chooses to start collecting benefits at age 62, her monthly payment will be $898 for her lifetime, plus adjustments for inflation. By age 85, an average lifespan, her total benefits would be $247,848.

“When to claim Social Security is for many older Americans the most important financial decision they ever make in their lifetime,” says Olivia Mitchell, an economics professor specializing in pension research at the Wharton School of the University of Pennsylvania. “My motto is work longer, save more and expect less.”

The Social Security system provides benefits to nearly nine out of ten Americans aged 65 or older. Approximately two-thirds of the nearly 40 million recipients depend on it for 50% or more of their retirement income, the CFPB study shows.

Social Security is particularly important for the growing number of beneficiaries aged 80 and older, many of whom see their savings dwindle by then. For this age group, Social Security accounts for 70% or more of their income.

The new CFPB tool was developed with the assistance of the Social Security Administration. That agency offers a website where people who pay into the system or receive benefits can create personalized accounts to track their earnings, get an estimate for future benefits and manage current benefits.