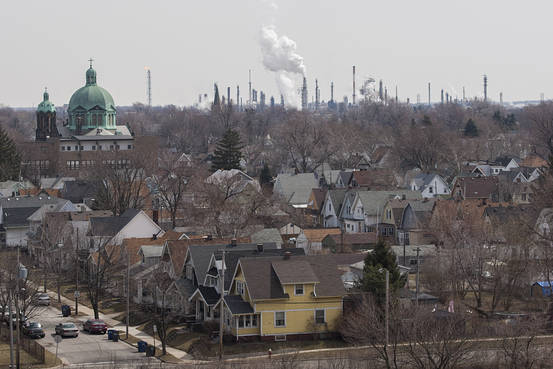 Toledo, Ohio, was among U.S. cities with the largest share of jobs that pay at least $35,540 and don’t require a four-year college degree.
JOSHUA A. BICKEL FOR THE WALL STREET JOURNAL

Working-class jobs with decent pay haven’t completely dried up. But some cities offer significantly more opportunities for those with less than a bachelor’s degree.

New research from the Federal Reserve Banks of Philadelphia, Cleveland and Atlanta shows the wide geographical disparity for what they call “opportunity occupations”—jobs that often pay better-than-median wages and don’t require a four-year degree.

The number of such occupations shrank by 1.7 million nationwide between 2005 and 2014 even while total employment rose by 4.9 million, or to 27.4% of all jobs from 29.8%. That’s bad news for most Americans: About two-thirds of prime working-age adults don’t have at least a bachelor’s degree, according to Education Department data.

To find out which occupations and cities offer the best chance for that group, Fed researchers dug into data from the Labor Department and Burning Glass Technologies, a private company that analyzes the job market. The positions must pay at least $35,540 a year, the national median wage based on Occupational Employment Statistics data from 2014, adjusted for local variations.

“This study presents preliminary evidence that for workers who lack a bachelor’s degree but seek employment at a decent wage, not all economies are created equal,” the authors said. “An economy that provides opportunity for these workers could be seen as a real asset to attract active labor-force participants from other areas or to retain–and potentially retrain–current residents.”

Registered nurses, truck drivers, bookkeepers, supervisors in the retail industry, policemen, admin assistants and electricians are some of the most prevalent opportunity occupations.

And cities such as Louisville, Ky., Birmingham, Ala., and Springfield, Mass., have the biggest share of jobs in such fields. By contrast, New York City, Stamford, Conn., and Washington, D.C., offer the smallest share.

Based on the authors’ calculations using data from Burning Glass, the top 10 metropolitan regions with highest share of total employment classified as an opportunity occupation are:

One hopeful note for many job seekers: Some jobs might have become more accessible for workers with less education in recent years.

“One possibility is that the national labor market is recovering from the Great Recession, and this research provides early evidence that employers are relaxing standards and seeking workers with lower levels of formal education as demand for labor increases,” the study said. “One could also point to an increasingly agile workforce development and job training industry in preparing workers for these positions, a situation which might make a college degree less relevant than targeted workforce training in the eyes of employers.”

Jobs and Industries Where It Takes the Longest to Get Hired