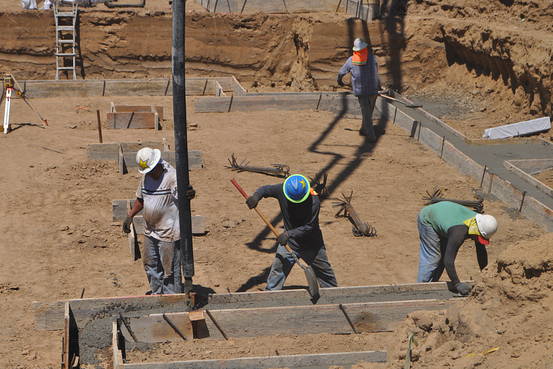 While debate rages on about whether demand or supply factors are more to blame for the sluggish home-construction recovery, most industry observers and participants agree on at least one point: Construction labor is in short supply.

Scant availability of skilled construction workers has hampered home construction at various times in the past few years of recovery. But the shortfall seems to have grown more acute of late, as new-home sales are up 21.2% so far this year from the same period last year and commercial construction has increased steadily.

Construction employment isn’t quite keeping pace with that rebound, and workers with certain skills, such as carpenters and sheet-metal installers, are hard to find.

“We are finding a greater failure rate of subcontractors in the industry because they are not able to hire the skilled workers that they need,” said John Finch, chief executive of PBG Builders Inc. in Goodlettsville, Tenn., on a conference call with media on Thursday organized by the Associated General Contractors of America. “That’s resulting in some budget issues and work that has to be redone.”

The Associated General Contractors, the largest U.S. construction-industry association, on Thursday released the results of its survey of 1,358 construction firms about their perspectives on the labor market. Of the respondents, 86% reported difficulty filling jobs for hourly craft workers and salaried supervisors and specialists.

Asked which hourly workers are hardest to find and hire, 73% of respondents cited carpenters, 65% mentioned sheet-metal installers and 63% said concrete workers. In terms of salaried and management employees, 55% of respondents said project managers and supervisors are scarce, 43% mentioned estimating professionals and 34% cited engineers. 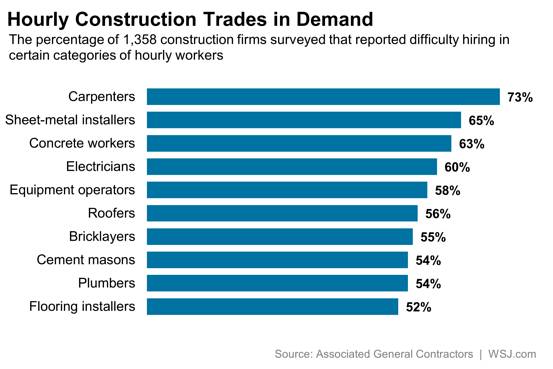 The shortages contribute to weaker-than-expected home construction through stretching the construction cycle. Home building is a sequential process, meaning that windows can’t be installed until walls are erected, and walls can’t be built until foundations are set. A delay at one stage slows the entire process.

The construction industry was decimated during the downtown, when the industry lost an estimated 2.3 million workers from peak to trough, according to the Labor Department. Little data is available on where those workers went, though it is likely that many left the workforce entirely. A portion likely work in the oil-and-gas industry or are waiting to be rehired there if and when it rebounds from depressed oil prices. Others probably returned to families abroad. Regardless, many aren’t returning to construction.

Since its nadir in early 2011, construction employment has rebounded by 17.6% to nearly 6.4 million workers in August. Yet that’s still well short of last decade’s peak of 7.7 million.

Often forgotten is the discussion of the construction-labor shortage is the slow recovery of related fields.

“It’s not just boots on the ground building our houses,” said Sheryl Palmer, CEO of Taylor Morrison Home Corp., which sold 1,877 homes in the second quarter, in an interview. “It’s all the way through the supply chain, from planning to architects, to pulling building permits and inspections. That infrastructure was decimated.”

The solutions mentioned by the Associated General Contractors focus more on recruiting new workers into construction than on enticing back those that left. The group advocates increasing federal funding for secondary-level career and technical education, streamlining the process for establishing construction-focused schools and company-created training programs and allowing more immigration for construction work.

Though most respondents in the survey said they had increased wages to retain and attract workers, Mr. Finch, the Tennessee contractor, said wages need to go higher still.

“The cold, hard facts are, even in this boom market, construction prices are high but they really aren’t where they ought to be,” he said.